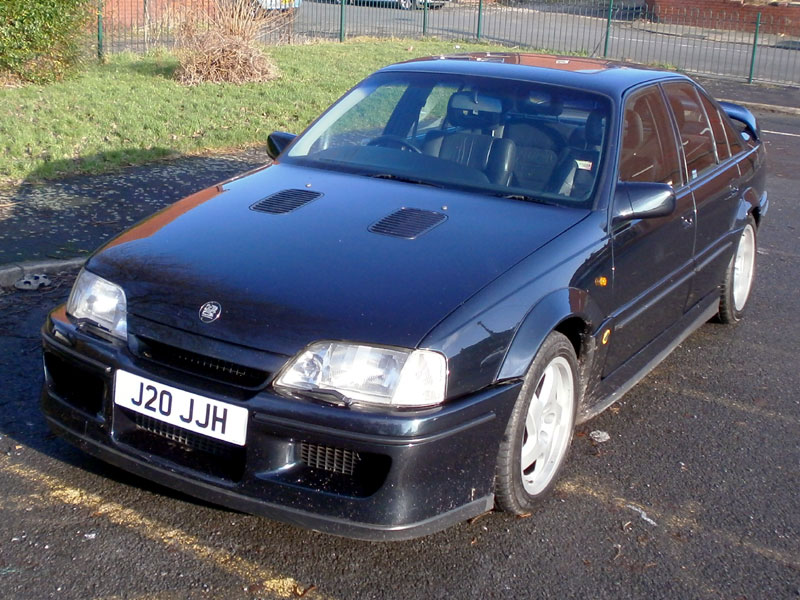 The Vauxhall Lotus programme commenced four years into Vauxhall Carlton/Opel Omega production (1990) and was intended to comprise 1100 cars - in the end just 950 were completed (320 Vauxhalls and 630 Opels). As reworked by Lotus, they gained a rear spoiler, bonnet air intakes, Lotus badges on the front wings and a bodykit with considerably wider wheel arches. Each example was finished in the same very dark shade of Green. A new, stiffer block of 3615cc formed the basis of the 377bhp engine, which was topped off by a pair of Garrett T25 Turbochargers. The unit was mated to the six-speed ZF gearbox from the Corvette ZR-1. The suspension was considerably upgraded, larger AP brakes installed and suitably wide 17-inch Ronal wheels squeezed under the arches. The result was a large, luxury, four-door Saloon that could launch to 60mph in 5.2 seconds and reach 177mph flat out; making it the world's fastest such car for many years to come.

Reportedly a very tidy and original example of this rare breed, the Lotus Carlton now being offered for sale has had just two-owners from new; the first of which retained it for 20 years as his everyday transport. 'J20 JJH' boasts a fully stamped service book plus a history file containing bills over the years totalling in excess of £40,000 - these include those for a replacement clutch and for £2,000 worth of work from last year alone. The original bill of sale lists the factory-fitted extras as sunroof and heated leather seats. The vendor describes the freshly refurbished alloy wheels as 'looking like new', the bodywork, Imperial Green paintwork, six-cylinder engine and six-speed manual gearbox as 'excellent', and the Black leather interior trim as 'very good for the age and mileage' - the odometer currently registers an unwarranted 114,000 miles.
Share: