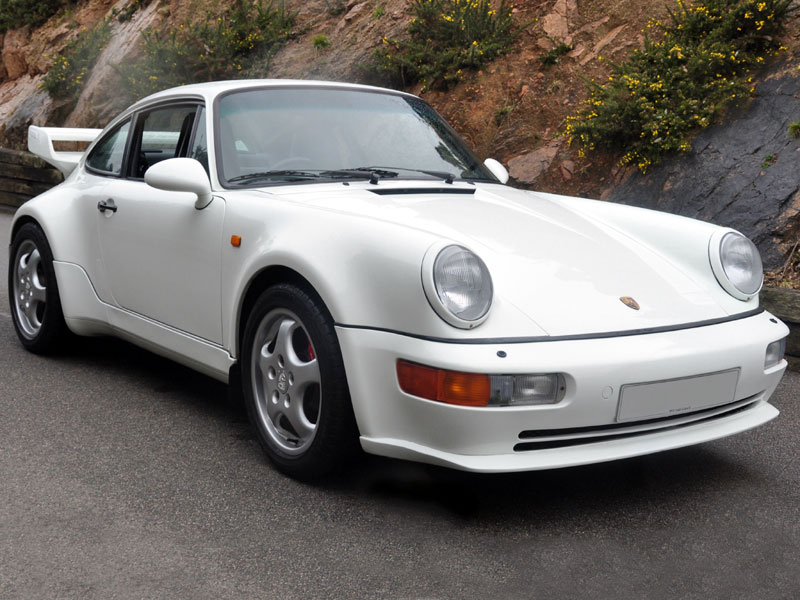 This very smartly presented right-hand drive 964 Turbo has been domiciled on the island of Jersey since new, a five by nine mile dot in the English Channel the Porsche could no doubt span in minutes if the laws allowed. It has had just two previous owners and is finished in an eye-catching shade of White and trimmed in White-piped Black leather. Its 14 stamp service record evidently supports the currently indicated mileage of 87,000 and shows the maintenance to have been carried out by just two garages - a Porsche main agent and an independent specialist. The Turbo benefits from having been treated to a main agent service earlier this year and an MOT that remains valid into March 2017. The car comes with paperwork providing its NOVA number and proof the VAT owed has been fully paid, and is currently considered by the vendor to have 'excellent' bodywork, flat-six 3.3-litre engine and five-speed manual transmission, and a 'very good' standard of paintwork. An appreciating asset.

Porsche's 964 Series of cars was produced between 1989 and 1994. It was penned by Benjamin Dimson and featured significant styling revisions over the outgoing 993 model, the most obvious of which were the more integrated bumpers. The first turbo version of the newcomer appeared in March 1990. A turbocharged derivative of the 3.6-litre M64 engine had yet to be developed, so it was initially powered by a revised version of the 3.3-litre unit previously found in the 930 model. In its latest guise it was smoother, less prone to lag and more powerful - the figures were 320bhp at 5,750rpm and 332lbft of torque at 4,500rpm - sufficient to whisk the Porsche to 60mph in 5.0 seconds and on to a top speed of 167mph. Total production of the 3.3 Turbo Coupe amounted to 3,660 worldwide.

PLEASE NOTE: This lot has been NOVA declared by the vendor. He has also volunteered to pay the admin fees for Peter Anderson of Imported Vehicle Registration to UK road register the car on behalf of a new owner should it remain in the UK.
Share: