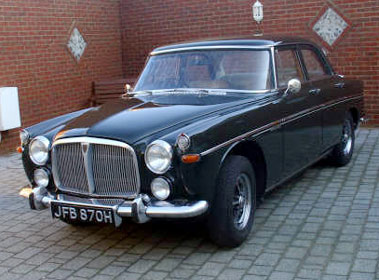 Introduced in 1958, the new 3 litre (P5) saloon was Rover's first monocoque design. Styled by David Bache, it was a handsome car with a well appointed and comfortable interior. One of the best selling British luxury cars during the 1960s, it was subject to a programme of continual improvement. Thus, in 1960 its independent torsion bar front suspension gained disc brakes, while in 1963 the advent of the MKII P5 brought with it a more rakish coupe variant. The MKIII of 1966 gained improved seating and a few detail changes inside and out but was beginning to be outclassed by its rivals in terms of drivetrain refinement. To redress the balance, Rover installed a new 3528cc OHV V8 engine in the P5 the following year and by doing so created the P5B. Based on a 1959 Buick design, the alloy V8 developed some 161bhp and 210lbft of torque which when mated to the standard fit three-speed automatic gearbox gave a 115mph top speed and 0-60mph in 11.5 seconds. With sporty Rostyle wheels and power assisted steering, the P5B was a firm favourite among businessman and politicians of the era (Harold Wilson's car was reputed to have a pipe rack in the back).

Finished in Arden Green with beige leather upholstery, this particular saloon example is described by the vendor as being in "very good" condition with regard to its engine, automatic transmission, interior trim, bodywork and paintwork. Reported to have belonged to its first and second keepers from 1970-1995 and 1995-2004 respectively, `JFB 870H' entered the current (third) ownership via Hurst Park Automobiles. Showing some 56,000 miles to its odometer, the saloon is understood to be "highly original" and to "drive and sound as a Rover should"; while, we are also informed that it has the benefit of a stainless steel exhaust. Eligible for historic class (free) road tax, this cosseted P5B is offered for sale with MOT certificate valid until March 2010.
Share: