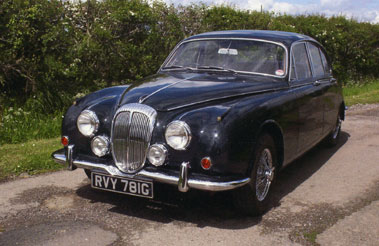 In addition to yielding a much-needed extra factory, Jaguar's acquisition of Daimler in 1960 also brought with it the exquisite Ed Turner designed 90º V8 engine. By installing this 2548cc 'hemi' into the MKII bodyshell, Jaguar hoped to create a more exclusive, upmarket car that would appeal to Daimler's more conservative client base. Launched in 1962, the new model wore a distinctive version of the traditional Daimler fluted grille and was initially only available with three-speed automatic transmission. In common with the MKII, it featured all round disc brakes, independent front suspension and a Panhard rod located 'live' rear axle. Though, with leather upholstery, spot and fog lamps, heated rear window and wheel trims (rim bellishers) as standard, it was notably better equipped. Credited with 140bhp and 155lbft of torque, the Daimler was reputedly capable of 115mph. Much scarcer than its sibling, it was also held to enjoy superior chassis dynamics thanks to its more favourable weight distribution.

Finished in green with light tan leather upholstery, this particular example is variously described by the vendor as being in "OK" (bodywork, paintwork), "good" (electrical equipment, interior trim, chassis, wheels / tyres) or "very good" (engine, automatic transmission) condition. Reportedly with its last owner for fifteen years, 'RVG 781G' is understood to have had "a lot spent on it" including an "engine overhaul (cylinder heads, bearings, valves etc), replacement automatic gearbox and brake system refurbishment (new discs, pads, pipes)". While, other work has apparently seen the saloon benefit from the fitting of "a stainless steel exhaust system, chrome wire wheels and new front subframe mountings" as well as "many more new parts". Able to boast "lots of history and receipts for work done", this seemingly pampered Daimler is offered for sale with MOT certificate valid until May 15th 2008 and historic class (free) road tax valid until February 2008.