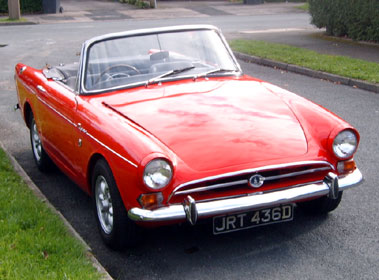 The Sunbeam Tiger was conceived in the West Coast of the USA and inspired by the success of the AC Cobra - the result of inserting a small-block American V8 engine into the nose of the British designed and built AC Ace. Rootes American Motors Inc. saw the potential for performing a similar operation on the stylish but rather pedestrian Sunbeam Alpine, whose 1.5-litre, four cylinder engine made it more of a loping GT car than an out-and-out sports machine. Preliminary research suggested that the engine used to produce the Cobra - Ford's 4.3-litre (260 cu in) `Windsor' unit - would be the appropriate powerplant, and a prototype was commissioned from Carroll Shelby, the man behind the Cobra project. Further research and development proved the concept to be viable and, somewhat unsurprisingly, increasing the capacity of the engine by no less than 2.8 litres resulted in a car of completely different character. The basic layout of the Alpine was retained and the car featured independent suspension at the front using coil springs and a live axle at the rear supported by semi-elliptic leaf springs. The 164bhp engine endowed the car with a top speed of around 120mph and a 0-60mph acceleration time of under eight seconds, leading Tigers to enjoy success in both racing and rallying over the years. A total of some 7,085 Sunbeam Tigers were eventually produced, including 536 of the now very rare 4.7 litre MK 2s.

The RHD car offered is a 1966 MK1. Finished in red with black trim it has been retained by the current owner for many years, during which time it has been treated to a lengthy and thorough restoration, since when the engine has only completed 1,700 miles. He describes the coachwork as being "very good and rust free"; the paintwork as "excellent" and the car "a delight to drive". It is understood he is only parting with the Tiger as his young family requires transport with more seats. With genuine Cobras now fetching several hundred thousand pounds each, the spotlight is increasingly on the Sunbeam Tiger, which offers a comparable character and level of performance for a fraction of the outlay.
Share: