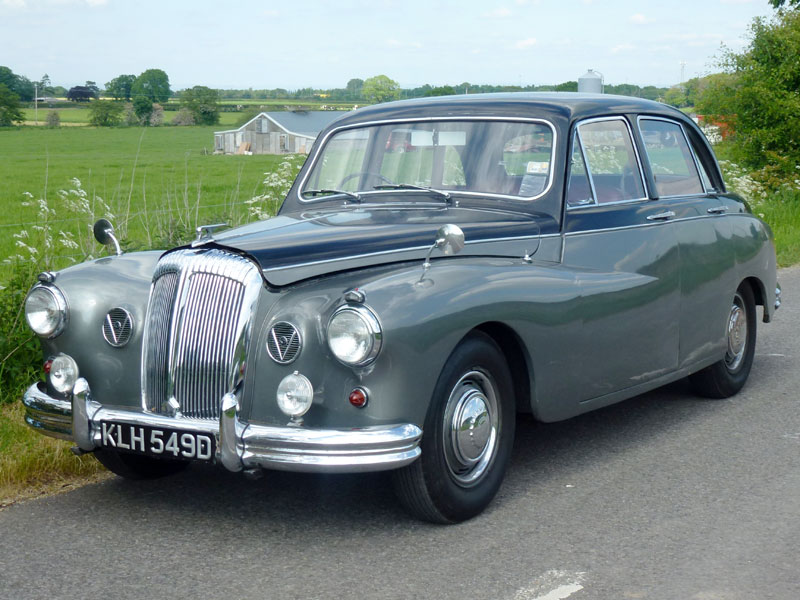 Introduced in 1959, the Daimler Majestic Major was something of a wolf in sheep's clothing. An upright and imperious four-door saloon that was almost visually indistinguishable from its Majestic sibling, the Major was powered by a 4561cc OHV V8 engine that developed a quoted 220bhp and 283lbft. Designed by Edward Turner of Ariel Square Four fame, the unit was topped by a 'Hemi' alloy cylinder head and allied to a three-speed automatic gearbox (complete with acceleration maximising 'Speedhold' facility). Based around a massive cruciform-braced box-section chassis equipped with coil-sprung independent front suspension, a well located 'live' rear axle and four-wheel disc brakes, the Daimler's Q-car status was cemented by class-leading 120mph performance. Trimmed in a luxurious manner that befitted former holders of the Royal Warrant, the Majestic Major remained in production until 1968 by which time some 1,180 are thought to have been made.

Reportedly "purchased new in 1966 by the William Whiteley Scotch Whisky distillery" and "used as their London chauffeur car until 1978, being regularly serviced by Stratstone's of London", 'KLH 549D' is since understood to have passed through the hands of various private enthusiasts. Finished in Black over Silver with Red leather upholstery, the Daimler is said to have covered a mere 59,200 miles (a figure apparently substantiated by the accompanying history file which contains an impressive array of documentation from the original delivery note through to the latest MOT certificate). The imposing saloon's nicely patinated interior boasts a renewed woollen cloth headlining and original luxury rear footrug, while its steel wheels are shod with the correct hubcaps and rimbellishers not to mention comparatively fresh cross-ply tyres (circa 6,000 miles old). Now in need of some remedial bodywork, this appealing and decidedly rare Majestic Major nevertheless possesses a current MOT certificate valid until January 2013.
Share: