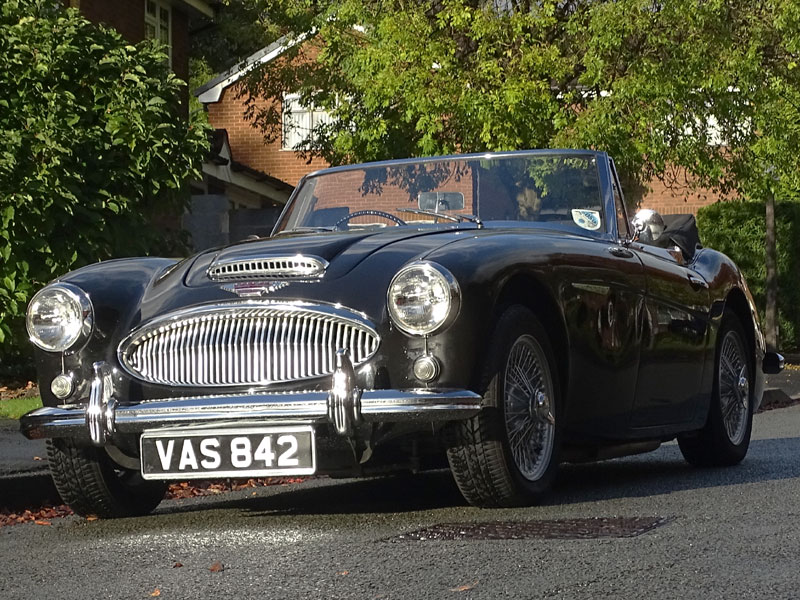 This very tidy and original-looking 3000 is finished in Black, trimmed in Tan leather and rides on painted wire wheels. Originally an American export model, it was dispatched on May 15, 1963 to the dealer in Jacksonville, Florida. It remained in the US until being repatriated in 2003 and was then treated to a restoration and conversion to righthand drive between 2005 and 2008. The Healey was then enjoyed and maintained by its owner until his passing, winning Austin-Healey Club concours awards on two occasions during 2012. That same year the car was granted a very positive condition report by the Club, which forms part of the history file, together with a Heritage Certificate and MOT valid to August 11 next year. The indicated mileage presently stands at an unwarranted 63,000 and the vendor views the plush interior trim as 'excellent', and the bodywork, paintwork, straight-six engine and four-speed manual gearbox as all being in 'very good' condition. An attractive example of an increasingly sought after model.

Launched to great acclaim at the 1952 London Motor Show, the 'Big' Healey enjoyed steady development, with the original four-cylinder cars giving way to the 100-Six of 1956, which was followed by the first of the 3000s in 1959 and the MKII 3000 in 1961. Identifiable by its new grille and bonnet air intake, the MKII was still available as a two-seater (BN7) or four-seater (BT7), but power was increased to 132bhp, courtesy of three 1.5 inch SUs on separate inlet manifolds. These, however, proved difficult to balance and the relatively short-lived MKIIA introduced in January 1962 featured better breathing courtesy of a pair of 2 inch SUs, plus wind-up windows, superior hood and wrap-around windscreen. A total of 6,113 BJ7s were manufactured before the model was supplanted by the MKIII in October 1963.
Share: