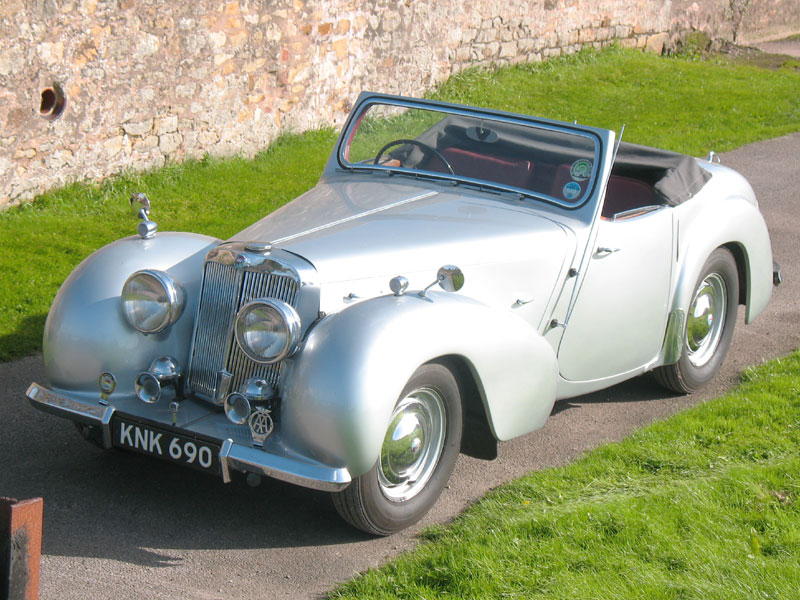 Introduced in late 1948, the Triumph 2000 Roadster shared the same flamboyant styling and dickey seat as its Frank Callaby-penned predecessor, the 1800 of 1946. Based around a near identical ladder-frame chassis equipped with independent front suspension, hydraulic shock absorbers and four-wheel drum brakes, the newcomer benefited from the adoption of a more refined hypoid-bevel rear axle. Considerably torquier than the unit it replaced, the new 2088cc OHV four-cylinder engine made for a notably more relaxed and stronger performer. Such was the Roadster's new found in-gear flexibility that the decision was taken to provide three rather than four forward speeds - a move vindicated by the contemporary press who found the model would tolerate standing starts in top gear. As with the 1800, the 2000's gearchange was operated by a column shift, enabling three occupants to share the bench seat. Still bodied in 'Birmabright' alloy over an ash frame, save for its steel pontoon front wings, the 2000 used more panel bracing than the 1800 and thus provided a tauter drive. With a production run of only two years, just 2,000 2088cc-powered Roadsters are thought to have been made. Triumph Roadsters were subsequently immortalised in the BBC TV series Bergerac.

The 2000 Roadster 'KNK 690' was first registered in April 1949 and is finished in Silver complemented by Red leather upholstery. We understand its buff log book confirms there were just two family owners before the Triumph was acquired by the vendor in 1995. At that point the odometer apparently stood at just 43,000, to which he has subsequently added a mere 3,000 miles. While in his tenure it has been treated to an extensive ground up professional restoration and he currently considers the bodywork, paintwork, trim, engine and transmission to all be "excellent". The Roadster's equipment includes a period Radiomobile 'His Master's Voice' Model 100 dash-mounted radio. Other items being sold with the car include the aforementioned log book, MOT certificates dating back to 1994, and a photo file covering the restoration. This delightful Triumph is taxed until the end of this year and MOT'd into July of the next, and now awaits a suitably caring new owner.
Share this page: