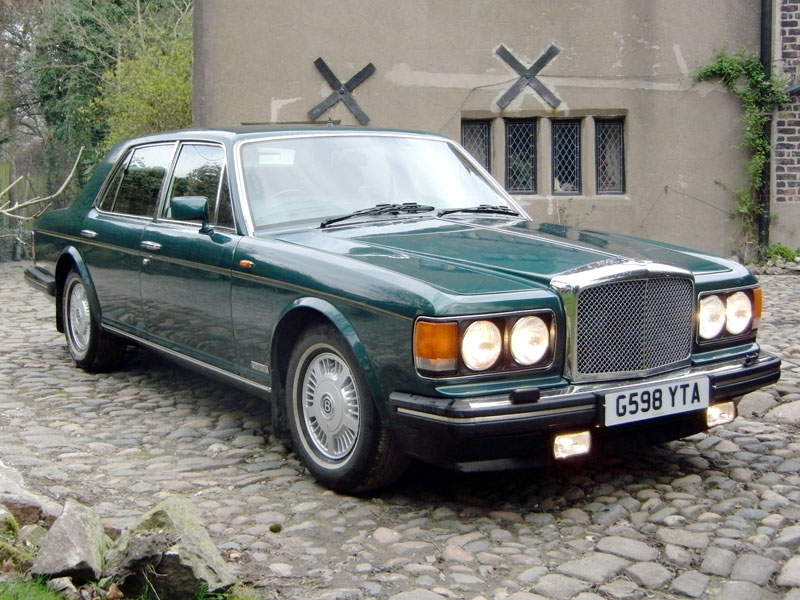 Introduced in 1984, the Eight was intended to attract younger, more entrepreneurial buyers to the newly resurgent Bentley marque. A more sporting proposition than its Mulsanne sibling thanks to specially stiffened front suspension and sharper steering, the newcomer was visually distinguished by a Le Mans-esque wire mesh radiator grille - though a more conventional slatted grille remained optional. The combination of Crewe's excellent and long-lived 6.75 litre OHV V8 engine mated to automatic transmission gave the handsome four-door saloon a reputed top speed of 130mph. Trading picnic tables and maple eye walnut for grained wood veneers and a substantial price cut, the Eight was a conspicuous success. Upgraded in 1986 with ABS brakes and Bosch fuel injection, the model had its target audience extended to include Europe and the USA, and by the time production ceased in 1992, some 1,736 had been sold worldwide

The Eight being offered left the Crewe factory in 1991. It sports Buckingham Green coachwork teamed with Green-piped Tan leather trim, and Light Green carpets and over-rugs. It was supplied new by H.A. Fox of Torquay to, it is believed, a Harley Street consultant residing in the West Country. Initially serviced by H.A. Fox, it was then cared for by marque specialist Balmoral and latterly by a combination of the current owner and John Mellor of Glossop, Derbyshire. The vendor considers the bodywork, trim, engine, transmission and trim as "excellent"; and the paintwork (presumed original) as "very good". The Bentley is taxed until September and MOT'd into April next year.
Share: