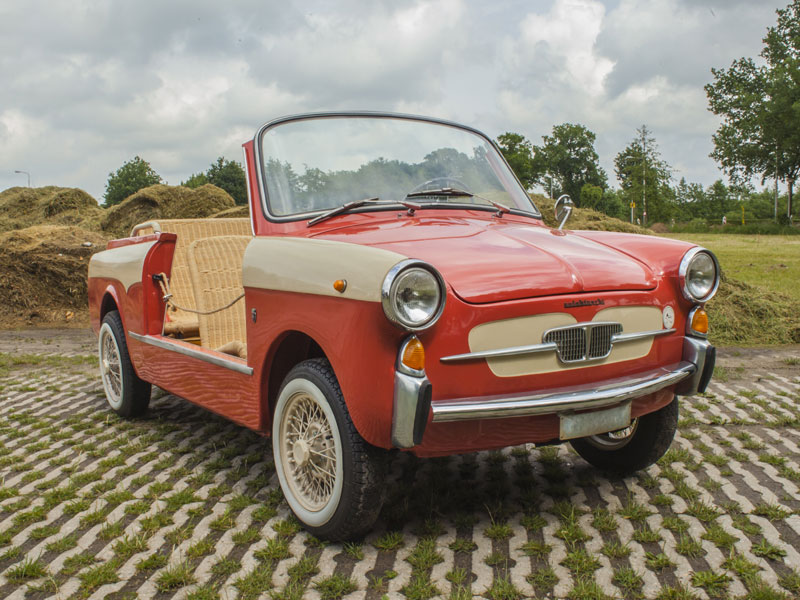 The origins of the Bianchi company date back to 1885 and by the end of that century it was renowned for the manufacture of high-end luxury passenger cars. These days it is better known for its quality bicycles and for the vehicles that resulted from its 1955 agreement between Fiat and Pirelli - one via which Fiat planned to capture the premium niche of the small car market.

The first offering from the consortium was the Bianchina - an upscale city car based on Fiat 500 mechanicals but priced above that model in the marketplace. It was pitched as a second car for Italy's increasingly affluent middle-class households; and to their female members in particular. It would ultimately be offered in numerous guises, the first of which was effectively a two-door landaulet dubbed the Transformable. Other factory-derived versions offered during the production run of 1957 to 1970 were the Berlina (Saloon), Cabriolet (Roadster), Panoramica (Estate) and Furgoncino (van). Initial versions were powered by the smallest of the Fiat family of engines - the 15bhp 479cc in-line twin cylinder unit. Later examples received the 18 or 21bhp 499cc one.

The 'matching numbers' Bianchina now offered is a far, far rarer derivative than any of the above - the vendor believes only four were ever produced. Bodied by the Italian coachbuilder Basandossi and dubbed the Jolly Spiaggina Mare, it is surely the perfect summer runabout, and this particular example is finished in Red and White and features wicker seating, yellow carpet mats, and rides on Borrani wire wheels. It's autographed by popular Italian singer Peppino di Capri and was probably once owned by him. The subject of an older restoration, it currently displays an unwarranted 23,761 kilometres, and is considered by the vendor to be 'good' in all major respects. A unique opportunity for sun worshippers everywhere!

PLEASE NOTE: Since the catalogue went to press we have been informed that this lot is a conversion rather than an original Jolly. We have also been told that Peppino di Capri has not owned it.
Share: