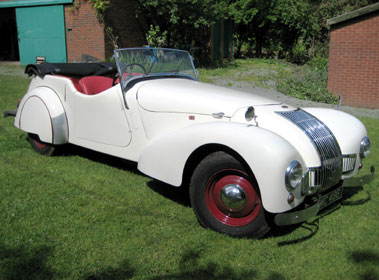 Succinctly described as 'the most consistently successful hot-rods of all time', the cars that emerged from Sydney Allard's small London premises were nothing short of a revelation. Victorious across a wide range of motorsport disciplines including rallying (Allard remains the only man ever to win the Monte Carlo event in a car of his own manufacture), sports car racing and sprint / hillclimbing, the recipe of large capacity V8 engines, low weight, simplistic suspension geometry and borderline brakes left critics dumbfounded and fans addicted. Introduced in 1946, the four-seater L-type tourer was built around a massive steel chassis supplied by John Thompson (Motor Pressings) Ltd of Wolverhampton.

Fitted with Leslie Bellamy designed split 'I' beam independent front suspension, a 'live' rear axle and powerful drum brakes, it was propelled by an 85bhp 3622cc sidevalve Ford V8 mated to three-speed manual transmission (though, a larger 4375cc Mercury engine was optional). Commenting on the new model Autocar magazine noted that it was "full of life and capable of holding almost anything on the road up to speeds in the region of 90mph". Early Allard owners included the likes of Ken Burgess, Leonard Potter, Maurice Wick, Richard Dimbleby and Dirk Bogarde, while a J2 sports racer famously finished 3rd at the 1950 Le Mans 24-hours (despite being stuck in top gear for almost half the event). Total L-type production is thought to have amounted to just 191 cars (of which only 10 or so are known to the Allard Register).

Finished in white with red leather upholstery, this particular example is variously described by the vendor as being in "good" (three-speed manual gearbox), "very good" (interior trim), "original" (electrical equipment), "average" (paintwork) or "excellent" (coachwork) condition. Stated to have had just two previous keepers from new, the Allard entered the current ownership during 1980. The subject of much recent expenditure, the L-type Tourer boasts a new hood, carpets and leather upholstery. While, mechanically it has benefited from a new exhaust, four fresh tyres and a major engine overhaul.

Work on the V8, which included a reground crankshaft and many new internals, has only recently been completed and as such we are informed that the "reconditioned unit still requires running in". Sporting such niceties as a sprung steering wheel, moulded spare wheel cover, wooden dashboard (complete with Allard 100mph speedometer), cutaway doors and rear wheel spats not to mention its original Middlesex County Council-issued 'UMC 486' registration number, the Allard has undeniable presence. A highly appealing 1940s sportscar with usable 'real world' performance, this four-seater L-type is worthy of close inspection.

PLEASE NOTE: This vehicle now has an MOT until June 2010.
Share: