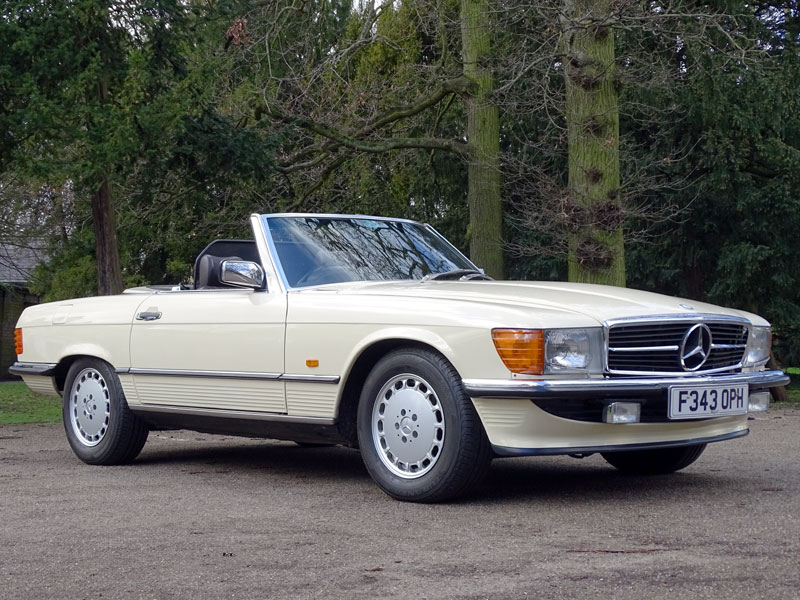 While even Mercedes-Benz quality has faltered occasionally over the years, the durability of its third SL model, the R107 Series, has long since been beyond doubt. Its production run spanned a remarkable 19 years, during which 237,287 SLs and 62,888 SLCs were manufactured; a very high percentage of which are still providing sterling service. It was launched in 1971, initially with just a 3.5-litre engine (350SL) mated to a four-speed automatic transmission. The model was essentially a marriage of chassis components from the mid-sized W114 model with the larger engines of the S-Class (W116) range. The car featured a two-door monocoque bodyshell with independent suspension all round. The power assisted steering was Daimler-Benz's own recirculating ball system. Braking was by discs all round - ventilated on the front. The range grew to two models when the 4.5-litre (450SL) derivative arrived the following year and to three when the 2.8-litre (280SL) appeared in mainland Europe in 1974. It was replaced by the 3.0-litre (300SL) in 1985. The latter's engine had an output of 185bhp - sufficient to provide the model with ample acceleration and an impressive top speed of around 130mph.

'F343 OPH' was first registered in January 1989 and supplied new to its first owner by Woking Motors - since when it has had just two further keepers and is currently registering 83,800 miles. Its Ivory-coloured bodywork is teamed with 'Brazil' interior trim, and the vendor presently considers the bodywork, paintwork, interior trim, straight-six engine and four-speed automatic transmission to all be in 'very good' order. He is now offering the Benz complete with original sales invoice and brochure, original book pack with service record containing 15 entries, further invoices, old tax discs and MOTs, plus a current MOT valid into March 2018. The car has both soft and hard tops.

PLEASE NOTE: The vendor warrants the mileage on this vehicle and it is now MOT'd until April 2018.
Share: