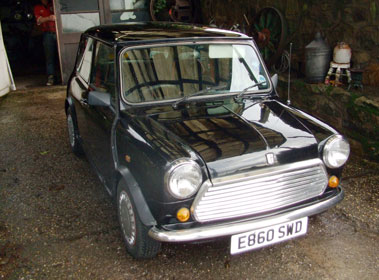 By the time the production line at Longbridge closed in 2000, more than 5 million Minis had been built. Alec Issigonis' purest design redefined the small car, this masterpiece of packaging making best use of its tiny - just over 10ft - length to seat four adults. Revolutionary features such as the gearbox tucked under the transverse 848cc engine, tiny 10in wheels and innovative architecture - putting the body seams on the outside - made use of every cubic inch of volume. The Mini grew up, gaining capacity, speed and comfort. Engines became larger and, in 1984, all Minis received 12in wheels and front disc brakes as standard. By then the range had been rationalised to two models - the Mayfair, launched in 1982, and the base Mini City. But a huge choice of special editions exploded from 1985. Buyers were kept busy with an extensive options list with which to personalise their cars.

This is one of those special models. Only 2000 of the Jet Black edition, and its sister the Red Hot, were made, distinguished by bold model decals on the sides and boot, plus tinted glass with opening rear windows. These limited-edition cars retain the 998cc engine for the Mini's legendary economy, while retaining verve of driving.
The vendor describes this car as being in "good" condition with respect to its coachwork, mechanicals and electrics and says: "This Mini has just been restored to a nice car after being rescued from some five years of dry storage. Having been subject to replacement of many parts to keep it in very good mechanical condition as and when needed, no love, care nor expense has been spared. The exhaust, brakes and water pump have been replaced, totalling £800 expenditure to pass its last MOT. The underside of the car is very sound". With just over 50,000 unwarranted miles recorded, this appealing car is offered for sale with Swansea V5C plus MOT certificate valid until December and current road fund licence.
Share: