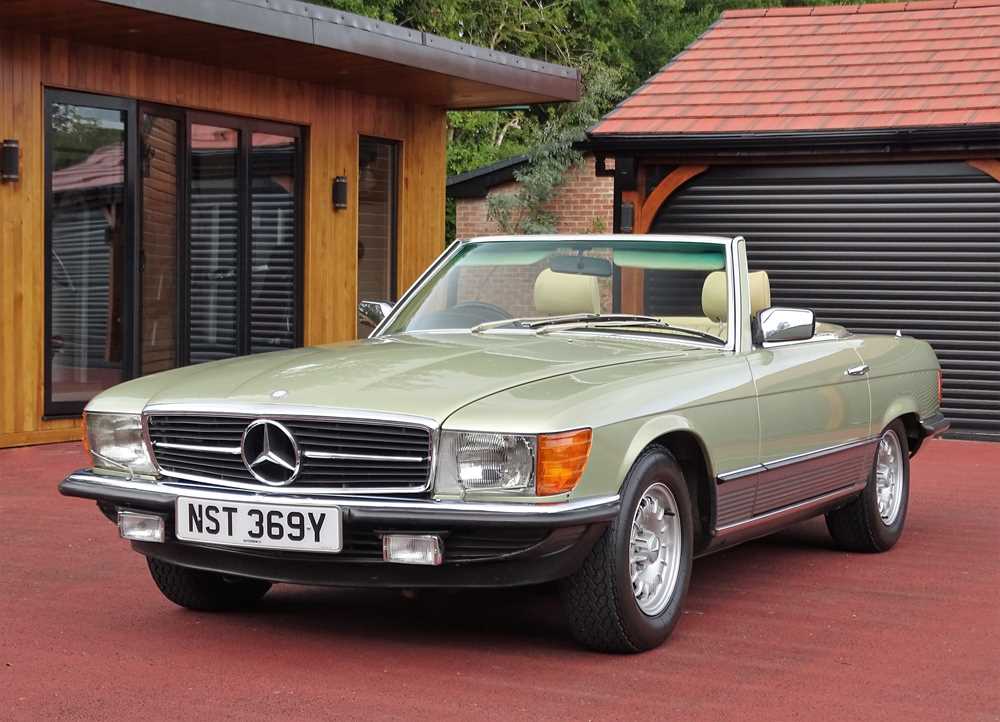 The engine bay has been sprayed with protective wax which has helped preserve various factory stickers on the 5 litre V8, while more Mercedes-Benz stickers are visible on the exhaust silencer and one of the front brake callipers etc. A ‘Regents Garage’ sticker adorns the hardtop’s rear window and the unused spare wheel still wears its original Michelin XWX tyre. Obviously, much loved the 500SL’s appearance and condition belie its thirty-seven years. It is amazing to think that 2021 marks fifty years since the introduction of the R107 SL and there can be very few surviving, UK supplied 500SLs which are as original as ‘NST 369Y’. Offered for sale with V5C Registration Document, Mercedes-Benz data card, history file and tool kit.

The mighty Mercedes R107-series SL was launched in 1971 to replace the long-lived - and loved - W113-series 'Pagoda' SL that had first appeared in 1963. Though dispensing with Mercedes' usual model identification, it was based on the suspension of the W114 saloon and the model ran till 1989 with more than 237,000 examples built: with the exception of the G-Wagen, this was the longest single series ever produced by Mercedes-Benz. The Bruno Sacco-designed car was bigger, heavier and softer-riding than its predecessor under a more mature skin - though these cars still handle - and was designed to reflect a changing marketplace, winning early plaudits from such distinguished motoring writers as LJK Setright. Equipped with a 3.5-litre V8 at UK launch, progressively larger engines were offered, through 380 and 420 V8, later 280 and 300 'sixes' and ultimately the 4973cc, 245bhp 500SL made between 1980-'89. This model, with its all-alloy fuel-injected V8, was made for Europe only (though a few slipped into North America as grey imports) and, with 60mph available in 7.4 secs and a top speed of 140mph, was faster even than the US, Japan and Australian-market 560SL. Plenty of R107s (and its longer-wheelbase coupe variant the SLC) come to market but 500SLs are still a rarity, with only 11,812 built.