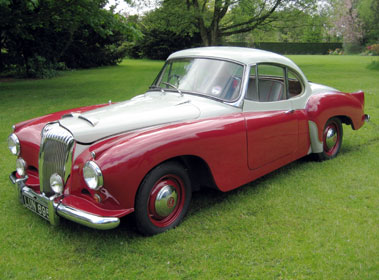 "This alternative style of the renowned open Roadster with folding hood and side screens has been designed to meet the requirements of those who, while requiring a car which will give them 'Roadster' speed and performance, prefer the protection offered by a fixed head coupe" (Daimler Conquest Roadster Fixed Head Coupe brochure).

Among the last products of the 'Docker Era', the Daimler Conquest Roadster Fixed Head Coupe was short-lived to say the least. Of the four or five cars built, this particular example is the only survivor known to the Daimler Lanchester Owners Club. While 'LUN 895' enjoys the further distinction of having been exhibited on the stand of coachbuilders, Carbodies, at the 1955 Earls Court Motor Show. As its unusual nomenclature suggests, the newcomer was closely derived from its Daimler Conquest Roadster predecessor. Based around a cruciform-braced chassis equipped with independent double-wishbone front suspension (actuated via laminated torsion bars), a leaf-sprung 'live' rear axle, hypoid-bevel final drive, Bishop cam steering, all round telescopic shock absorbers and Girling hydromechanical drum brakes, it was powered by a 2433cc OHV straight-six engine allied to four-speed pre-selector transmission (complete with the marque's famous fluid flywheel).

With a quoted 100bhp and 130lbft on tap thanks to its high-lift camshaft, big valves and twin SU carburettors, the Daimler Conquest Roadster Fixed Head Coupe was reputedly capable of 0-60mph in 14.5 seconds and 101.7mph; performance which necessitated the fitting of stiffer suspension and more powerful brakes than its saloon sibling utilised. Sporting a prominent fluted radiator grille, swooping beltline, extravagant rear deck and Jaguar XK-esque glasshouse as well as purposeful bonnet scoops, elongated tailfins and lashings of chrome, the model did not want for presence; be it on a Motor Show stand or the High Street. As if to emphasise its more dynamic nature, the Conquest Roadster Fixed Head Coupe eschewed the wooden dashboard and door cappings normally associated with a Daimler interior in favour of leather facings and bold instrumentation. Principally bodied in aluminium over a sub-structure of the same material, the model could well have gone into volume production. However, with styling that was a little too racy for Daimler's traditional clientele and a rather ambitious £1,750 14s 2d price tag the two-seater was destined to remain one of the Coventry manufacturer's rarest ever offerings.

Refinished in its Motor Show livery of maroon over grey with red-piped grey leather upholstery, 'LUN 895' is variously described by the vendor as being in "good" (electrical equipment, paintwork), "very good" (engine, coachwork), "overhauled" (four-speed pre-selector gearbox) or "excellent" (interior trim) condition. Entering the current ownership some twenty or so years ago, the Daimler is understood to be "in excellent running order after having many loving hours spent on it". Riding on correct type steel wheels shod with new tyres, the Conquest Roadster Fixed Head Coupe has also benefited from a fresh exhaust and retrimmed interior. Taxed and insured for road use up until 31st October 2008, the two-seater was treated to an overhaul of its pre-selector gearbox earlier this year (including replacement cork linings / seals etc). Part of a small private collection, it would seem to need little, if anything, before being pressed into active service again. Quite possibly unique, this stylish coachbuilt Daimler represents the opportunity to acquire a slice of British motoring history. Welcome at Daimler Lanchester Owners Club gatherings, it is also likely to draw the attention of other event organizers and perhaps garner a few Concours invitations?