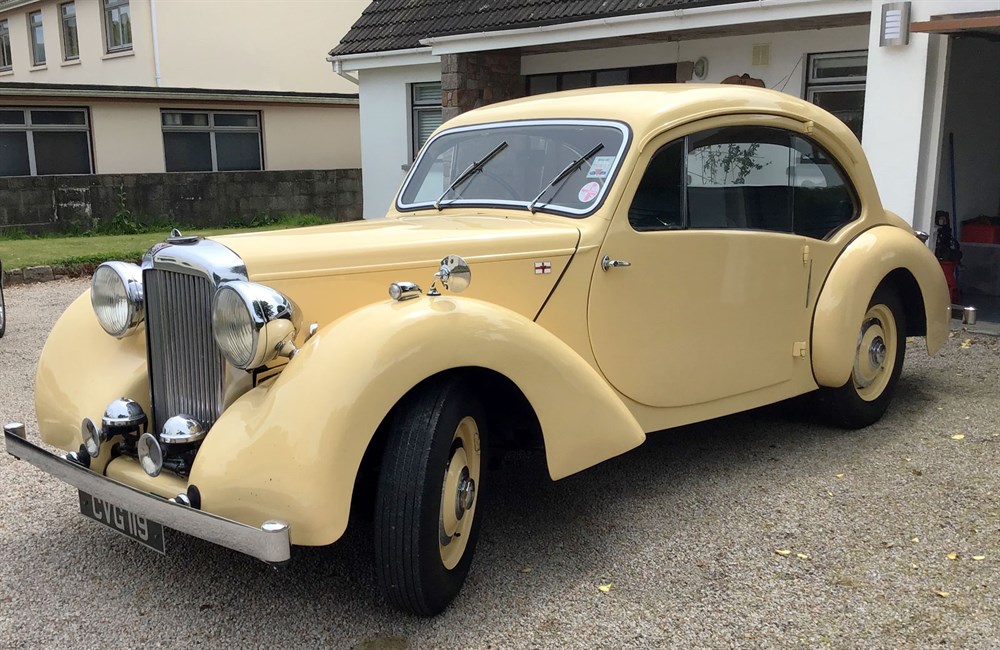 - The press / launch car and one of just thirty-six made

- Much recent restoration work including an engine overhaul, full repaint and sundry re-chroming

This is a rare, unique opportunity to purchase a very special car with wonderful history and provenance. Not only is this one of just 36 ever made, it is indeed the launch car and demonstrator vehicle that has some unrepeatable history. The car is supported by excellent paperwork and records and the condition is impressive having undergone recent restoration works with an Alvis specialist in the North West.

The Duncan Alvis was launched in the summer of 1947. The brains behind the car was Ian Duncan, an Aeronautical Engineer, who had taken over an old canning factory in North Walsham, Norfolk, to produce his own mini car, the Duncan Dragonfly, powered by a 500cc BSA motorcycle engine. To defray the costs of the Dragonfly (which had many innovative features later seen on the Mini), Duncan began to make a few bodies for the Donald Healey Motor Company.

The Reliance Garage Ltd, Heigham Street, Norwich was an Alvis agent and their sales manager, Stan Boshier was so impressed by the prototype Healey Duncan, that he asked Duncan to put a similar body on an Alvis TA14 chassis. Created by Frank Hamblin, another refugee from the aero industry who was instrumental in the design of the Dragonfly, the body was a daring pillar-less construction with a large glass area, an elegant streamlined tail with a useful luggage capacity and wide opening doors for easy rear seat access. The task of putting the body into production fell to Bert Wall who had been headhunted from Wolseley for his coachbuilding expertise.

The seasoned ash frames were made by a firm of Norfolk boat builders, and each took 3 weeks to assemble, using 62 pieces of wood, screwed and glued together with Aerolite 300F, the resin used to bond the wooden structure of the Mosquito fighter bomber. The frames were then sent to Motor Panels of Coventry to be clad in high-tensile aluminium alloy panels.

Trimming and paintwork was carried out in-house in Norfolk with extensive soundproofing and high quality wood and leather furnishings. "The combination of the Duncan body and the Alvis chassis provides standards of silence and performance, only normally obtained in much larger cars", said the sales brochure.

The chassis and running gear were exactly the same as the TA14, the 65bhp 1892cc four-cylinder engine being good for a top speed of 75 mph and a comfortable cruising gait of 65mph. Handling was flat and responsive with Marles steering, Girling brakes and semi-elliptic springing, front and rear. "This elegant sports saloon is at once outstanding, its handsome contours creating the impression (later to be convincingly demonstrated), of silent speed, superb acceleration, and excellent road manners", wrote Autocar.

Weighing some 2.5 cwt less than the Mulliner-bodied TA14 saloon, the Duncan had spirited performance and was guaranteed to draw a crowd wherever it parked. Unfortunately, such hand built luxury did not come cheap and, at £2,205 including purchase tax, it was almost twice the price of a standard TA14. Strictly for the well-heeled motorist only, just 36 were ever sold (34 saloons and 2 tourers).

'CVG 119' was first registered on 19th June 1947. Alvis supplied the chassis and engine no 20998 to the reliance Garage in Northwich on 12th May 1947. According to David Rogerson, the former Works Manager at Duncan Industries, this was the launch car and was finished in late 1947. However, there was a problem with the paint in that the striking yellow colour failed to 'take'. David recalls an entire night during which - supported by a case or two of beer - a successful result was achieved just in time for the pre-arranged photo call the next morning. David also made the first trip, which was an excursion north to demonstrate the new car at Inglis in Edinburgh, and at Galt's in Glasgow.

Being the only demonstrator, the car was soon back in the South. Ian Duncan then hit 'manna from heaven' when he met Kay Petre in the Steering Wheel Club in London and was able to explain his plans to her. Kay was a racing driver with a string of successes to her name, not only in Austin Sevens, but also in much larger mounts such as the 10.5 litre Delage, in which she lapped Brooklands at 134 mph in 1963. Donning her hat as the motoring correspondent of the Graphic, Kay duly obliged with a splendidly 'tongue in cheek' piece on how Alvis, Daimler and Healey, were combining forces to adopt a joint body style. As David Rodgerson recalled, "the phone never stopped ringing". A week or so later, on 6th September 1947, Kay Petre was photographed emerging from 'CVG 119', having entered the car in the Concours d'Elegance at the RAC's Jubilee Rally in Regent's Park. Very recently Pathe Newsreel of the event has been discovered showing Kay driving the Duncan Coupe in the RAC event.

The Scottish sales tour obviously worked in that the first recorded owner is Robert P Laing of 11 Bedford Place, Alloa, Scotland, who acquired the car on 7th April 1948. It then passed through the hands of a series of owners in the Newcastle-upon-Tyne area, being acquired by Les Siddle on 31st August 1994. Les was lucky enough to be the owner of two Duncan's, the other being 'FWS 962'. He was largely responsible for ensuring the preservation of the first ever Alvis Duncan, which was acquired by the previous owner on 20th January 2014. It then underwent a further restoration by Mick Fletcher of Blackburn during 2014 / 2015 with invoices totalling over £17,000. Major work included an engine overhaul to include carrying out a re-bore and sleeve back to standard, new pistons, replacement crankshaft pulley, flywheel, new clutch and new gearbox, engine and radiator mounts. The body was totally stripped down, the interior removed, glass removed, various timbers replaced and the car treated to a full re-paint and sundry re-chromed brightwork. Since restoration the Alvis has been in regular use, previously attending in 2018, many shows and events across the North of England, for 2019 the car has been used for rallies in the Channel Islands and the South of England.

There are files accompanying the car, one being a very detailed history file with 'as found' pictures, the other a record of the restoration of the Coupe. The present owner reports that the Alvis is an extremely reliable car being 'on the button', light to drive in modern traffic, with good brakes and a responsive engine. It never fails to attract admiring glances.

With the Alvis Centenary celebrations continuing into 2020 culminating in August next year with the Coventry Rally, now is the time to buy a historic Alvis and take part in next year's events.
Share: