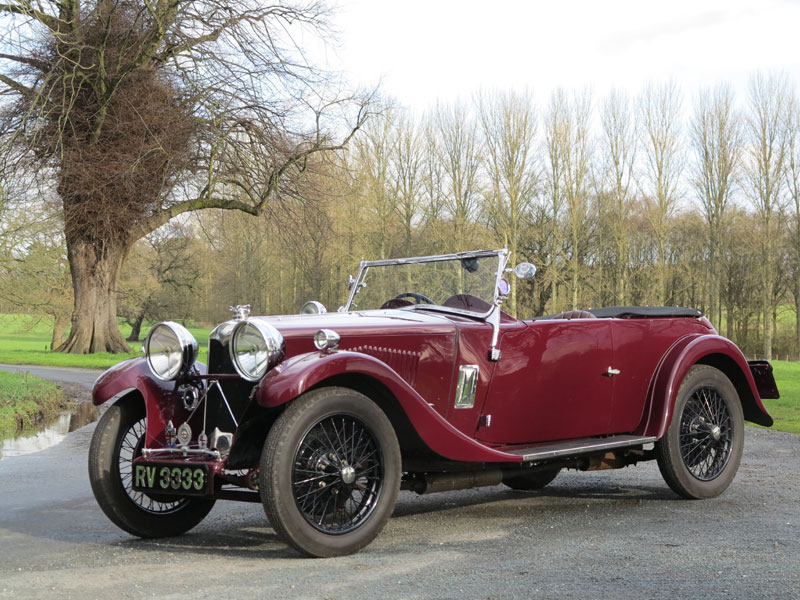 Arguably the handsomest Riley 9 derivative, the two-door Lynx Tourer was only current for the 1933 season. Sporting half the door count of its successor not to mention an elegant 'disappearing hood', the short-lived model was notably rakish and low-slung. Powered by a 'sports' version of the Coventry marque's advanced 'twin-cam' four-cylinder 1087cc engine mated to four-speed manual transmission, the four-seater enjoyed a level of performance that belied its 9hp tax rating. Based around a ladder-frame chassis equipped with all round semi-elliptic leaf-sprung suspension and bias-adjustable drum brakes, the Riley was known for its crisp handling too.

Built to special order complete with a bespoke dashboard, chassis 6021101 was collected from the factory by first owner Herbert Way Esq. A solicitor by profession, Mr Way was also a keen motorist and participated in several of the Riley Motor Club's 24-hour Rally and Reliability Trials (badges for which adorn the front of 'RV 3333'). An accompanying period photo of the Lynx in action shows some minor damage to the offside running board and one hypothesis is that safety concerns may have prompted Mr Way to commission the 'straight top' doors and pillar-mounted spotlight which it retains to this day.

Remaining with its first keeper until 1956, the Riley was taken off the road and laid-up in a barn some eight years later. In between times the two-door Lynx briefly belonged to the vendor - then an art student - who ran it for a memorable summer before his father intervened. Advertised for sale in Motor Sport magazine by Andrew Booth of Orchid Cars, 'RV 3333' re-entered the current ownership during 1991 for the princely sum of £10,500. A long overdue 'ground up' restoration was begun later that decade. Renowned marque specialist Blue Diamond was entrusted with refurbishing the chassis, gearbox, front / rear axles, steering, brakes and suspension, while Hamlins Engineering of Bridgwater overhauled the original powerplant with Sprite camshafts and Brooklands inlet / exhaust manifolds etc

John Foy Ltd of Royston was tasked with renovating the ash frame and repairing / renewing the alloy bodywork as well as re-trimming, re-wiring, re-painting and generally finishing the car. The project stalled when the vendor's wife was diagnosed with terminal cancer but recommenced during 2012 and was completed in time for his 70th birthday celebrations last January. Used on an often daily basis since then, the Riley has covered some 4,500 post-rejuvenation miles.

Refinished in its original Maroon livery and having had over £100,000 lavished on it (aside from the cost of re-acquisition), 'RV 3333' is considered by the vendor to 'surely be the best Lynx in the world'. Thanks to the efforts of Mr Way's nephew, the Riley's history file not only contains a plethora of restoration invoices but also numerous period photos and even his uncle's 1933 RAC badge.
Share: