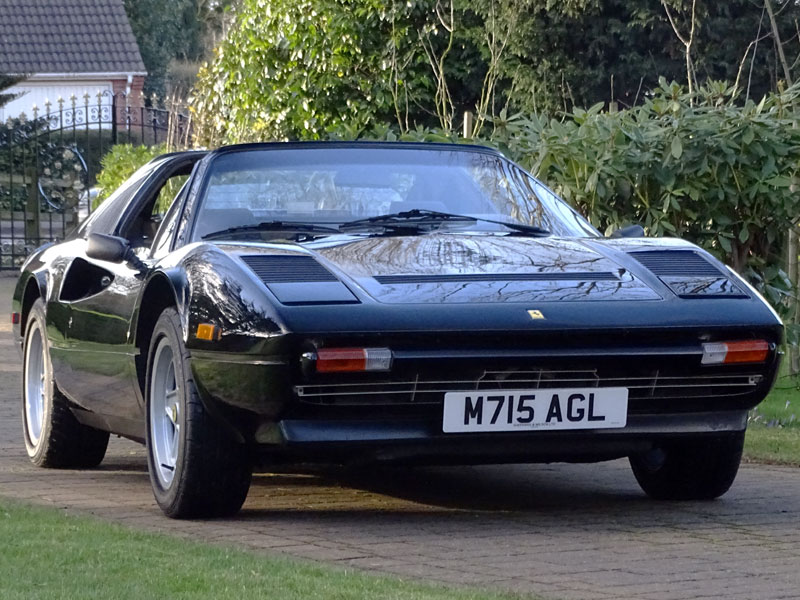 By switching to Bosch fuel injection in March 1981 Ferrari robbed its successful 308 GTB / GTS models of some forty horsepower. Worried about the consequent loss of performance, Maranello executive Eugenio Alzati determined to give the 90-degree 'quad-cam' 2926cc V8 its teeth back. Announced in October 1982, the new QV or 'quattrovalve' model was a revelation. Sporting - as its name suggests - four-valve cylinder heads, it was credited with developing some 240bhp and 192lbft of torque. Emissions friendly, it nevertheless boasted less noise, more power and better throttle response than its predecessor. Reputedly capable of 0-60mph in 5.7 seconds and 158mph, the QV cars once again had the raw speed to match their sublime Pininfarina sculpted looks.

Built in February 1984 and supplied new to California, this particular left-hand drive example migrated to Japan just over a decade later. Imported to the UK last winter, the DVLA chose to issue the Ferrari with an age-related number plate which relates to its date of first registration in Japan (April 1995) rather than its year of manufacture. Accompanying paperwork shows that the 308GTS QV was maintained by marque specialists Tifosi and Mspeed in the land of the rising sun. The former carried out a timing belt change and water pump overhaul etc in 1999, while the latter fitted the European specification bumper during 2004 and performed the most recent timing belt change in 2015 (some 600km ago). Doubtless benefiting from having spent thirty-two years in more car friendly climates, the two-seater presents nicely. The Black leather upholstery looks to be original and since arriving on these shores the 308GTS QV has been treated to a new steering rack, nsf wheel bearing, alternator, brake fluid change, overhauled electric window motors and refurbished alloy wheels etc. Issued with a 'no advisories' MOT certificate on 18th November 2016, this handsome Ferrari is offered for sale with the aforementioned paperwork plus a favourable report from Graypaul (Nottingham).