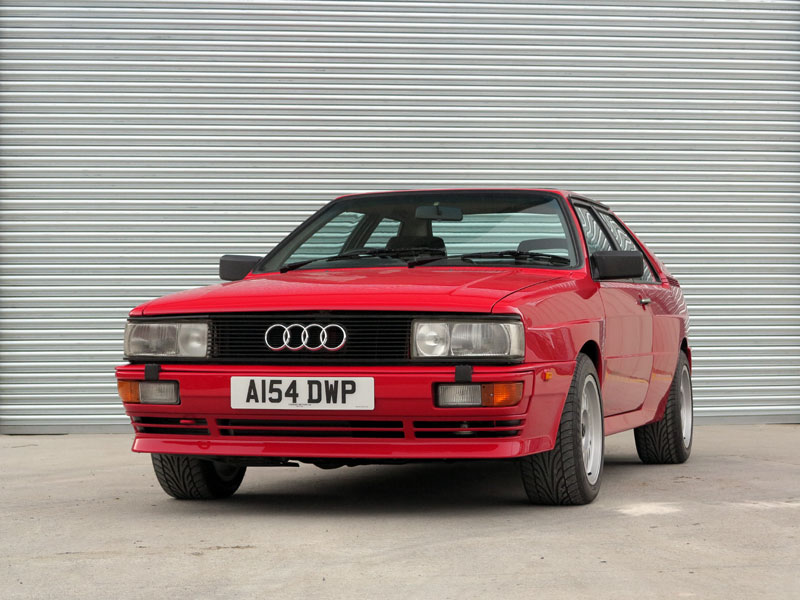 - Formerly the property of Nigel Mansell CBE, the 1992 Formula One and 1993 Indycar World Series Champion

- Extensively restored by the vendor, the proprietor of a manufacturer-approved bodyshop, with some £15,000 spent on parts alone

Among the defining performance cars of the 1980s, the first generation (or 'ur') Audi Quattro boasted supercar humbling pace thanks to its superb four-wheel drive system, rally-bred suspension and punchy turbocharged engine.

Keeping up with this particular example would have been a challenge beyond most mere mortals given that it was road registered to Nigel Mansell on 13th June 1984. Driving for Team Lotus and resident on the Isle of Man at the time, the future Formula One and Indycar World Series Champion appears to have sold the Coupe following his move to Williams Grand Prix. Interestingly, Mansell's new race number at the Grove-based equipe - the iconic Red Number '5' - matched the colour and cylinder count of the Audi.

Understood to have had just four former keepers since being UK road registered as '1 DWP' on 4th February 1985 (its current number plate 'A154 DWP' was assigned on 17th June 1993), accompanying paperwork shows that the Quattro was subject to an insurance total loss payment during April 1995 due to 'theft of parts from the vehicle'. The Audi's turn of speed and sure-footed handling made it a popular choice with members of the underworld in period (hence the reason no doubt that DCI Gene Hunt was allocated one in the hit TV series 'Ashes to Ashes') and there used to be a ready market for 'discounted spares'.

The components in question are presumed to have been ancillaries because today the four-seater retains its original factory-fitted engine block (number WR005159). Being built on 31st March 1984, chassis WAUZZZ85ZEA900940 also features the revised, lowered suspension (down by 20mm all-round) and wider eight-inch wheels that had been phased-in earlier that month. Intriguingly, the Coupe was first road registered in Germany on 10th April 1984 - despite being built to right-hand drive specification - and thus might have been a special order car?

Off the road for eight years prior to entering the current ownership in November 2011, the Quattro was subsequently treated to an extensive, almost 'bare shell' restoration. The proprietor of a manufacturer-approved bodyshop, the vendor fabricated several repair pieces himself as well as sourcing two new front wings, fussing over panel fit for hours and keeping the use of filler to a minimum.

Thoroughly overhauled, the 2144cc five-cylinder powerplant benefited from a reground crankshaft, Dialynx exhaust manifold, re-cored radiator, fresh clutch / flywheel, refurbished intercooler, Milltek Sport stainless steel exhaust system and various new internals. The suspension and running gear were rejuvenated too with replacement bearings, bushings and ball joints as deemed necessary. In all the vendor estimates that he spent some £15,000 on parts alone from the likes of Deutscheparts, Quattro Corner and TPS.

The original interior fabric had worn surprisingly well. Carefully cleaned, it belies the 116,000 miles shown on the car's odometer. Entrusted to a specialist, the digital dashboard was returned to full working order. Aside from the minor engine modifications, the Audi gained a later (but still ur-type) 20v steering wheel and rides on 8 x 15J R8 Ronal rims. Some 4,000 miles after the project was completed, 'A154 DWP' remains highly presentable having received a degree of restoration that would not have been financially viable had the current owner factored-in his own labour costs.

Starting readily upon inspection and looking every inch the 1980s icon that it is, this very nicely restored Quattro is offered for sale with copy Isle of Man registration document in Nigel Mansell's name, old Isle of Man tax disc (also in Mr Mansell's name), V5C Registration Document, MOT certificate valid until November 2016 and copy of Audi Driver magazine (January 2016 issue) on which it graced the front cover.
Share: