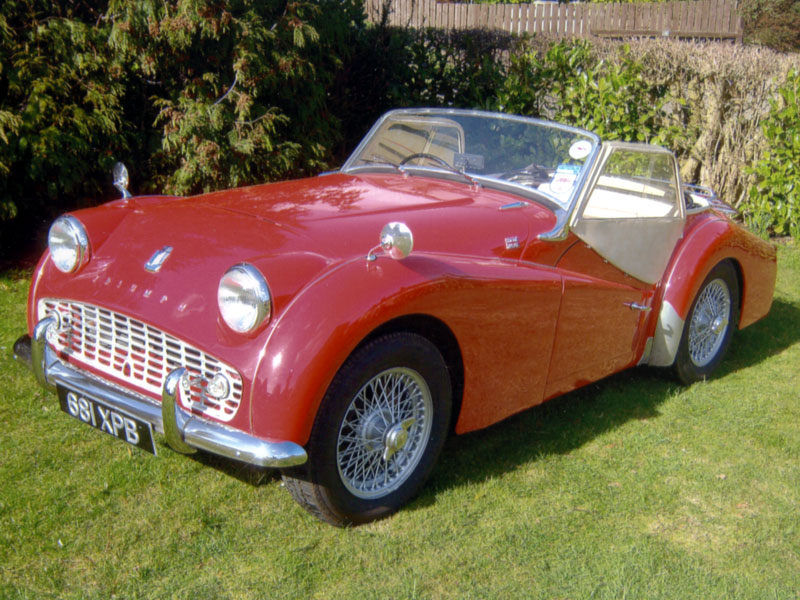 The TR3 of 1955 was a direct evolution of Triumph's TR2. With it came minor styling revisions, a slight hike in power and the options of an occasional rear seat and bolt-on steel hard top. The overdrive system for the four-speed manual gearbox was upgraded to work on the top three ratios, effectively giving a seven-speed transmission. In 1956 the front brakes were changed from drum units to disc. The final iteration of the TR3, the TR3A, appeared in 1957. It was instantly recognisable for its wider front grille, exterior door handles and lockable boot. The TR3A continued in production until 1962, by which time 58,236 are said to have been built. A road test by Road & Track magazine in the USA returned a 0-60 mph time of 12 seconds for the newcomer.

We understand '681 XPB' was one of the last TR3As, having been manufactured in 1960, though not registered until early 1962. An original, 'matching numbers' UK car, it was apparently the subject of a body-off restoration in 2007, during which the chassis was overhauled, a number of new panels and wiring loom fitted, the car resprayed in Triumph Signal Red and the interior retrimmed in Cream, Red-piped leather/vynide. The engine is believed to have been overhauled at an earlier date and equipped with an unleaded cylinder head, hi-torque starter motor and stainless steel exhaust. The current keeper acquired the Triumph in 2008 and has since fitted a stainless steel luggage rack, new mirrors, refurbished sidescreens, electric washers, halogen headlights and improvements to the fuel system. This exceptionally pretty TR3A comes complete with: tonneau, hood cover, photographic record of the restoration, a file of receipts, various spares, handbook and workshop manual. Taxed and MOT'd, it is only being sold to scale down the vendor's collection of classic and vintage cars.
Share: