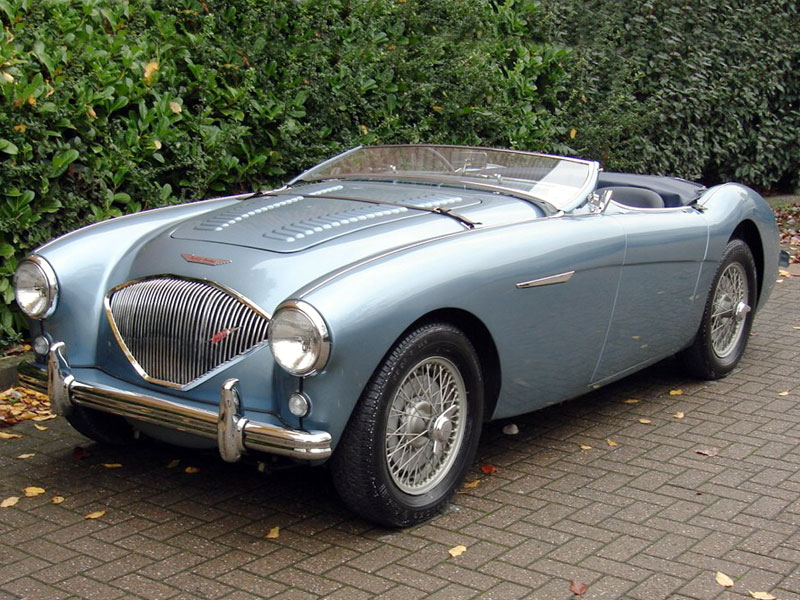 Donald Healey's eponymous company built a prototype two-seater sports car for display at the 1952 London Motor Show. It was based on Austin A90 Atlantic mechanicals and sported a notably sleek body designed by Gerry Coker and built by Tickford. It was dubbed the 'Healey Hundred' (a moniker chosen to reflect the car's ability to reach the magic 100mph), and, subject to a suitably encouraging response, Healey planned to build production versions in-house at his factory in Warwick. As things transpired, not only did the Ice Blue prototype more than impress the public, but also so excited Austin's Managing Director, Leonard Lord, that he struck a deal to build the car in volume at Longbridge. The newcomer was renamed the Austin-Healey 100/4. The rest, as they say, is history.

The 100/4's chassis was a departure from the company's previous backbone designs and comprised a pair of three-inch square box-section side members running the length of the car, some 17 inches apart. These were braced by parallel and cruciform cross-members to which the steel floor pressings were attached. After the first 25 cars had been constructed at Healey's own premises in Warwick, the production of the mainstream bodyshells was turned over to Jensen. Once complete, the shells were transported to Longbridge, where the Healeys were assembled alongside the A90.

The early examples (code named BN1s) were equipped with the same 90bhp 2660cc engines and manual four-speed transmissions as the A90 though, in an unusual move, Austin modified the gearbox so it operated as a three-speed unit with overdrive on the top two ratios. The car had 11-inch drum brakes all round. The front suspension was independent by coil springs while the rear featured a traditional live axle supported by semi-elliptic leaf springs. Damping was by Girling lever arm units all round and the steering was by cam and lever. A 1953 BN1 tested by Motor magazine returned a top speed of 106mph and achieved the 0-60mph dash in 11.2 seconds. A total of 10,688 BN1s are believed to have been produced between January 1953 and 1955 (the vast majority of which went overseas), when the model was superseded by the BN2.

During 1955, an additional so called 100M derivative was developed, the specification of which was based on that of the 1953 Works Le Mans cars that had finished the 24 Hour race a very creditable 12th and 14th overall. The engine featured larger carburettors fed by a cold air box for increased airflow, high-lift camshaft and 8.1:1 compression pistons, and produced 110bhp at 4500 rpm. The front suspension was stiffened and the bonnet gained a leather belt, plus louvres for improved cooling. Just 640 100Ms are understood to have been produced by the factory - all of which were based on the BN2 series cars. However, the 100M components (with the exception of the high compression pistons) were also made available in kit form for retro-fit to either BN1 or BN2 models. This kit raised power output to approximately 100bhp at 4500 rpm and could be ordered direct from BMC, allowing cars to be modified by Austin dealers and private owners alike.

The BN1 on offer is an original right-hand drive home market example from 1954, which is understood to have been upgraded with the 'Le Mans' kit soon after leaving the factory. The vendor informs us that it remained within the same family from 1966 to 2008. The following year it was treated to a very extensive restoration by marque specialist Peter Ellis and has apparently been used only sparingly since. This very pretty and desirable early 'Big' Healey is finished in Ice Blue and trimmed in Navy Blue leather. It comes complete with photographic evidence of the restoration and extensive service and MOT history, plus a current certificate valid into April 2012. The vendor considers the remarkably low registered mileage of 29,000 to be correct and assures us that 'NBT 641' "drives as well as it looks". A rare opportunity for the ever-growing army of early 'Big' Healey collectors.

PLEASE NOTE: The vendor has informed us that if you accidently hit the electric fan switch with your knees, it is located just to the right of the fuel gauge on the underside of the dashboard.
Share: