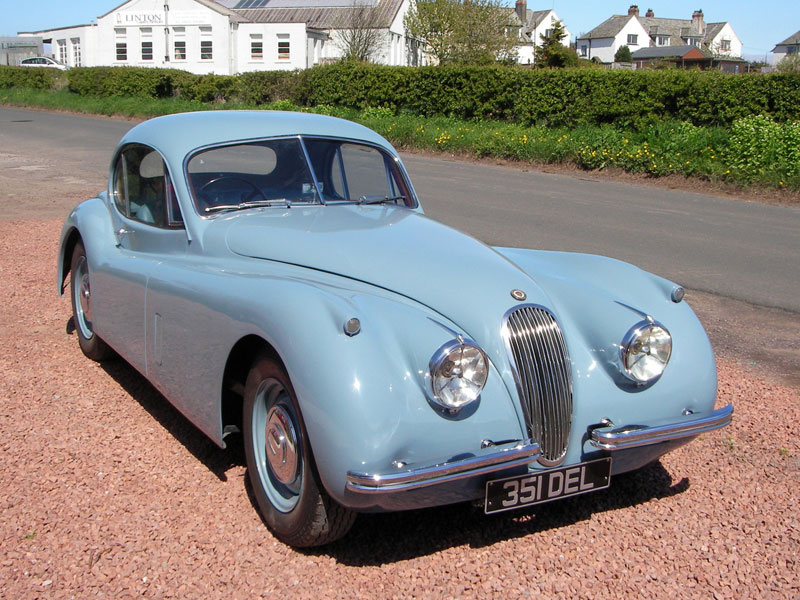 'Nothing like the XK120, and at its price, has been previously achieved - a car of tremendous performance yet displaying the flexibility, and even the silkiness and smoothness of a mild mannered saloon' - The Autocar, April 14th 1950

The stunning-looking XK120 Roadster caused a sensation when it was launched at the London Motor Show of 1948. Capable of 120mph and more (hence the name), it immediately assumed the mantle of the world's fastest production car. The equally elegant Fixed Head Coupe version followed in 1951 with the Drop Head Coupe completing the range in 1953. The key to the car's electrifying performance was its all new, alloy-headed DOHC 3.4-litre, straight-six engine, the basic design of which successfully powered a whole range of Jaguars until the late '80s. In standard form the output was 160bhp, but in SE (Special Equipment) guise (which included firmer suspension and a twin exhaust) this rose to 180bhp, and with the C-Type head installed nearer 200bhp was on tap. In testing a Fixed Head SE XK120 in 1952, Autocar achieved a 0-60mph time of 9.9 seconds. The 120's suspension was independent by wishbones and torsion bars at the front and by live axle mounted on semi-elliptic leaf springs at the rear. Steering was by recirculating ball and braking courtesy of Lockheed hydraulic drums all round. In order to confirm the model's top speed potential to the press, the second XK120 built, chassis 670002, was driven flat out on the Jabbeke straight, Belgium, achieving 126.448mph over the flying mile with hood and side screens erected, and an astonishing 136.596mph in stripped form. A few months later the same car won the Daily Express production car race at Silverstone in the hands of Leslie Johnson. Peter Walker was second in a sister car.

Recently awakened from a 20 year slumber in Scotland, the XK120 on offer is understood to have been the 16th of only 195 Fixed Head Coupes equipped with right-hand drive, and its interesting history is recorded in some detail in 'The Jaguar XK120 in the Southern Hemisphere' by Elmgreen and McGrath (2009). It was despatched to the Far East on May 6th 1953 and, following a few years in Kuala Lumpur, became the property of a C. Eames Esq. of the British High Commission in Singapore. He equipped the engine with C-Type camshafts, changed the car's colour from Pastel Blue to British Racing Green and competed with it before selling it to James Lockerbie OBE, who was then a Steward of the Singapore Vintage Vehicle Club. The latter fitted the XK with a new gearbox, lower axle ratio (3.54:1), larger carburettors, competition brake linings and alloy fuel tank, all of which it retains to this day. The Jaguar, then registered 'SY 457' became known for its results in sprints and hillclimbs and on the Thompson Road Grand Prix circuit with Lockerbie at the wheel, and was even reputedly driven by Le Mans-winner Ron Flockhart on one occasion.

In 1975, Lockerbie repatriated the Jaguar via Southampton, registered it '351 DEL' and had it made roadworthy by B J Ward Developments of Basingstoke before driving it to his home in East Lothian. Used occasionally until 1990, it was then committed to a restoration that progressed as far as some engine refurbishment, body repairs and a respray in its original colour of Pastel Blue before stalling. This caused the car to be stored until 2010, when it was unearthed by A1 Classic Cars LLP. They: treated it to body upgrades and a further respray; fitted new upholstery woodwork, headlining and carpets; and retuned the engine. This delightful Jaguar of interesting provenance is now being sold complete with a copy of the aforementioned book, workshop manual, general documentation, new MOT and a selection of its competition cups.
Share this page: