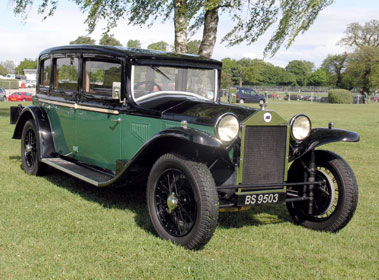 Introduced at the 1922 Paris Salon, the Lancia Lambda was an exceptionally advanced design. Supposedly inspired by contemporary ship-building practice, its highly innovative monocoque (or chassis-less) bodyshell was reinforced via a substantial transmission tunnel and integral seatback bulkheads. While other noteworthy features included independent 'sliding pillar' front suspension (complete with hydraulic shock absorbers) and four-wheel drum brakes. Powered by a series of compact V4 SOHC engines (2119cc 49hp, 2370cc 59hp and 2568cc 69hp) allied to manual transmission, even the earliest Lambdas were reckoned to be good for 70mph. Although not marketed as a sports car, the model's excellent roadholding saw a modified version finish 4th overall on the inaugural 1927 Mille Miglia (a class-winning performance which was repeated the following year). Evolving through Nine Series, the Lambda remained in production until 1931 by which time some 13,000 had been made - though, survivors are increasingly scarce.

This particular example, an Eighth Series Long Chassis car, is believed to have been supplied new to Argentina from where it was imported to the UK during 1990. Passing into the current ownership not long afterwards, the Lambda was found to be in need of extensive restoration following years of hard usage as a taxi. Determined to preserve its limousine coachwork, the vendor enlisted the help of a team of experts who between them brought the Lancia up to concours winning standards. Stripped back to component form, the chassis was thoroughly refurbished with particular attention being paid to its suspension carrying front trapezium. An original type replacement, the 2.6 litre V4 engine was entrusted to engineer Paul Atkinson of Derby who was also charged with rewiring the car. The exact origins of the coachwork remained a mystery until its door catch plates were sent off to be replated and once devoid of paint revealed the legend `Carrozzeria Garavani Torino'.

No small task, Tim Barker of Papplewick, Nottingham was commissioned to rejuvenate the limousine's intricate timber frame and exterior panel work. Something of a perfectionist, he was under instruction to reuse as much original metal as possible but numerous repairs aside had to fabricate the running boards and boot from scratch. The interior division was long gone too. However, a replacement was sourced from another dilapidated Lambda in exchange for a spare steering wheel (albeit one re-covered by Wheelwrights of Morecambe)! Commissioned to re-trim the car, Dave Beswick from Derby had a lucky break finding a scrap of original hide lurking under one of the seats which had long ago been reupholstered in vinyl. No less resourceful, P.W. Cooper of Crewe refinished the intricate handmade stringing in the division's woodwork and fabricated new door cappings to match. Choosing to wait for replacement parts to turn up and / or sourcing them from afar afield as Australia, the vendor was rewarded with a set of genuine instruments and suitable bulb holders for the headlamps etc.

Although, his patience and insistence on getting things right also meant that the restoration process did not come to an end until 2004. Since then the Garavani Limousine has won the `Best Lambda', `Best Prewar Car' and `Best Restoration' awards at various Lancia Motor Club Concours meetings. Proudly attending Lancia's centenary celebrations in Turin during 2006 (despite a temporary clutch malady now fixed), the car's most recent prize winning outing came with victory at the May 2009 VSCC Cheshire Life Concours. Riding on black painted wire wheels, this stunning Lancia is a real treat to behold. The smartest and most imposing Lambda that we have yet offered for sale it is accompanied by a slip case copy of Bill Jamieson's book `Capolavaro', MOT certificate valid until August 2009 and historic class (free) road tax.
Share this page: