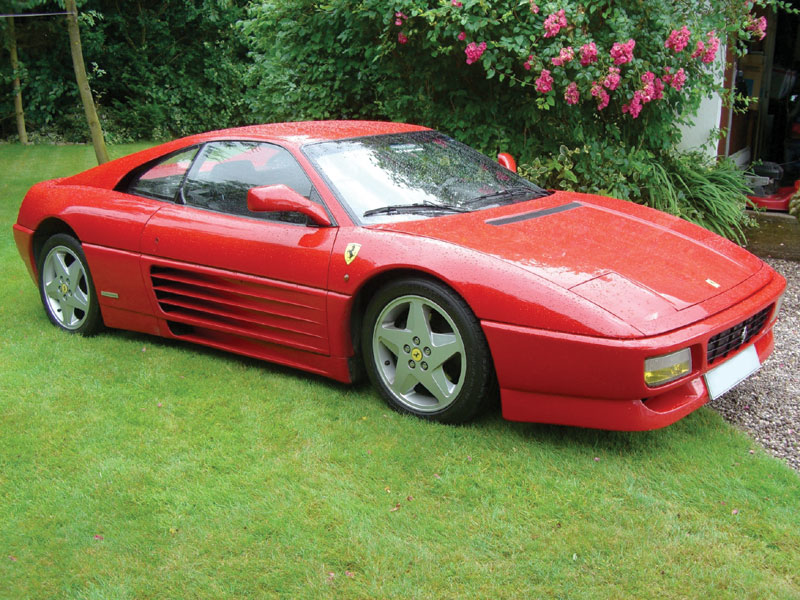 First seen at the 1989 Frankfurt Motorshow, the Pininfarfina-penned mid-engined 348 replaced the 328. The 348TB (Berlinetta) and 348TS (Spider) were the first series-production Ferraris to feature a steel monocoque chassis as opposed to a tubular frame, and a robotized production line was installed at the Scaglietti works in Modena specifically to produce the new shells. The newcomer shared a number of components with the Mondial, not least: the longitudinally placed 3405cc quad-cam 32-valve V8 engine and transverse (hence the T in the name) five-speed manual gearbox. Cradled in its own subframe, the V8 developed 300bhp and 238lbft of torque - sufficient to propel the newcomer to 60 mph in 5.4 seconds and to a top speed in excess of 170 mph. Suspension was independent all round by wishbones and coil springs, while braking was by anti-lock ventilated discs and steering by rack and pinion. In common with the Testarossa, but unlike the BB512 and 328, the oil and coolant radiators of the 348 were side-mounted, widening the prancing horse's waistline but making for a cooler cabin. Leather upholstery, air-conditioning and an adjustable steering column were among the model's standard features. It was eventually available in a choice of Coupe, Spider and Targa guises, and a total of 8,844 are understood to have been produced before the 348 was superseded by the 355 in 1994.

The left-hand drive 348 TB on offer departed the Maranello factory for the South of France in 1990 and is understood to been imported into the UK in 2009 - it is finished in classic Rosso Corsa complemented a Nero leather interior. The vendor acquired 'W235 TRY' from our June 2009 sale and has apparently recently invested over £5,000 on the Ferrari via Maranello at Egham. The work has included: attention to the air conditioning system, electric windows, door locks and handbrake; adjustment of the brakes, and the fitting of new spark plugs and plug leads. Now seeking a new home, this eye-catching junior supercar is being sold with MOT into May 2012.
Share: