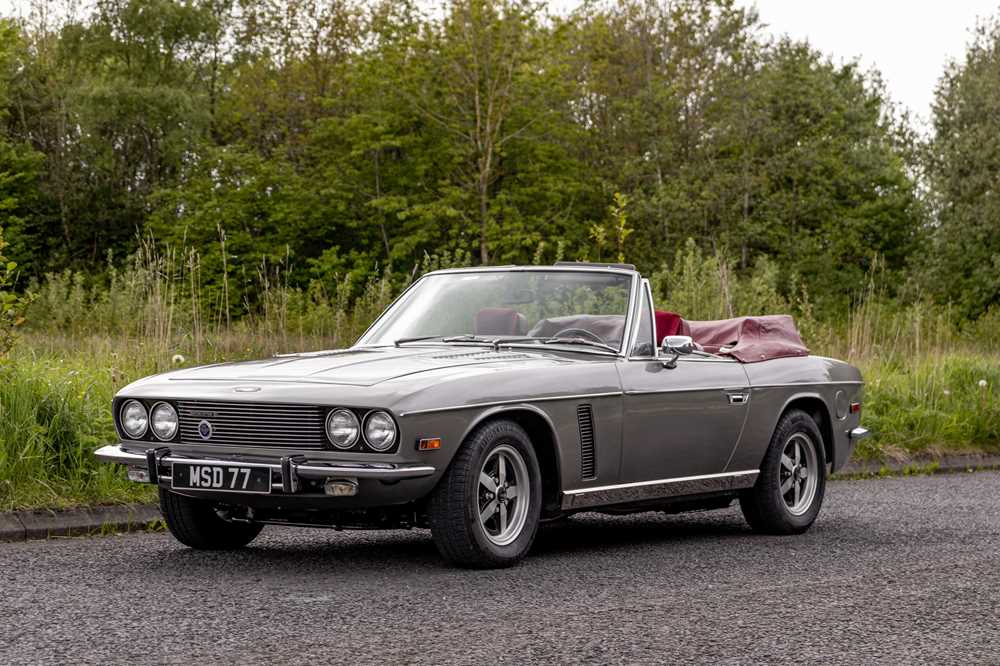 Jensen's striking replacement for the slant-eyed C-V8 first saw the light of day in 1966. It broke some of the firm's established traditions in that the design was outsourced - to Carrozzeria Touring - and the bodies were made of steel rather than glass-reinforced plastic. Power was initially supplied by a 6276cc Chrysler V8, driving through either a four-speed manual or three-speed TorqueFlite automatic transmission to an LSD-equipped Salisbury rear axle. The MKII model of 1969 brought revised frontal styling and ventilated disc brakes. Introduced at the October 1971 Earl's Court Motor Show, the Interceptor III was visually distinguished by cast headlight surrounds, GKN cast alloy wheels and a comprehensively revamped interior and was produced in four Series - G, H, J and S4. By May 1972 the engines on RHD cars had been increased in capacity to a whopping 7212cc. A total of some 6,408 Interceptors were produced between 1966 and 1976, however, just 505 of those were Convertibles.

One of 262 examples manufactured in 1975, chassis number 23111713 was supplied new to the United States of America in left-hand-drive configuration. Fitted with the aforementioned 6276cc Chrysler V8 engine allied to the three-speed TorqueFlite automatic transmission, the Interceptor is finished in Silver Grey (one of just 64) with complementary Red leather interior upholstery, a matching Red hood cover, and a hood trimmed in Black. Remaining in the United States until 1989, the Jensen was repatriated from Florida to the UK, being subsequently purchased in the same year by the vendor. In current ownership for some thirty-three years, chassis number 23111713 has a believed genuine recorded mileage of 71,965 miles at the time of consignment, with MOTs dating back to 1989, supporting the mileage.

Used and enjoyed between 1989 and 2000, the Jensen then benefitted from a comprehensive restoration which comprised full overhauls of the engine (with renovated Thermoquad), brakes, suspension, and steering, as well as a new hood, replacement springs, and reconolising of the original interior. The vendor informs that the bodywork has never been welded and shortly after the completion of the restoration, the Interceptor won the Jensen International Weekend Concours d’Elegance (2002). Offered with a history file which includes the aforementioned MOTs dating back to 1989, a large collection of photographs of the restoration, numerous invoices, Florida State Title, original Interceptor sales literature, the Concours d’Elegance winners certificate and current V5C. A rarity on British roads, this Interceptor III Convertible is worthy of close inspection!

PLEASE NOTE: The registration number shown in the images is not included in the sale.