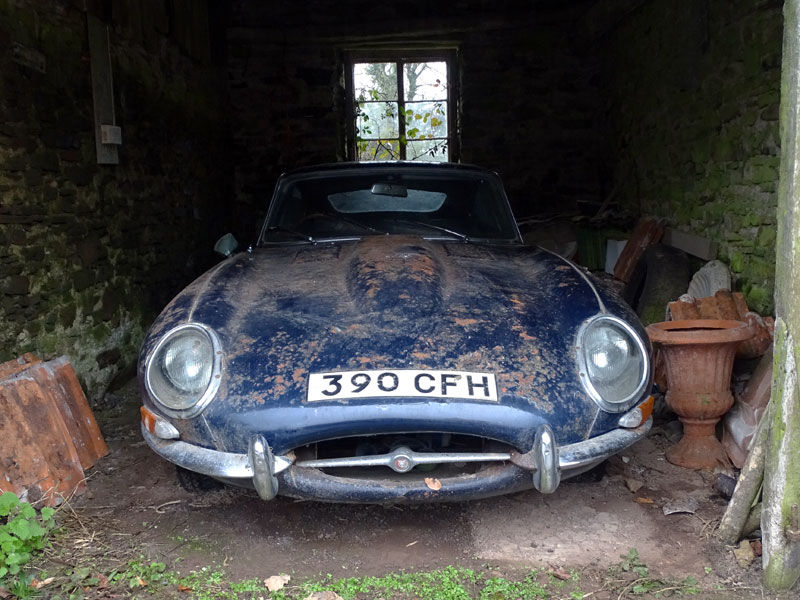 - Supplied new by Western Motors of Bristol to A.E. Powell Esq and current ownership since August 1976

- Credible but unwarranted 63,000 miles shown on the odometer

One of just 1,799 Jaguar E-Type 3.8 Fixed Head Coupes made to right-hand drive specification, this particular example - chassis 860826 - was completed on 23rd August 1962. Supplied new via Western Motors of Bristol to A.E. Powell Esq., the two-seater initially sported the latter's personalised number plate 'AEP 246' but had been re-registered as '390 CFH' prior to entering the current ownership during August 1976. A mere five years older than the Jaguar, the vendor spent several months grafting on the then still expanding M5 motorway so that he could become the envy of his university friends! A sports car enthusiast, he treated the E-Type to a thorough engine overhaul (crankshaft reground, new timing chains, fresh 40thou oversize pistons, chrome plated SU carburettors etc) as well as sundry running repairs many of which are documented in the accompanying history file. A notably tall gentleman, the seller fitted alternative seats to give him greater control of the car at high speeds but thankfully retained the original Dark Blue leather buckets which are being reinstated for the auction.

Taken off the road during the mid / late 1980s due to increasing business demands, the Fixed Head Coupe was driven into the first of the two North Devon barns that have sheltered it ever since whilst in possession of a valid MOT certificate. Last run some sixteen years ago, the 3.8 litre straight-six is stamped R7145-9 to both its cylinder head and block which tallies with the engine number quoted on the car's Jaguar Heritage Trust Production Trace Certificate. The same document also shows that the E-Type was initially painted Opalescent Silver Blue traces of which are still visible when the boot floor is lifted and the spare wheel examined. Opening the fuel filler flap reveals plenty of solid metal and, although by no means air tight, the Fixed Head Coupe's current Linney Barn abode seems to have been surprisingly kind to it. A potentially rewarding restoration project, this much-loved Jaguar displays an unwarranted but not inconceivable 63,000 miles to its odometer and is now ready to change hands again for the first time in forty-one years.