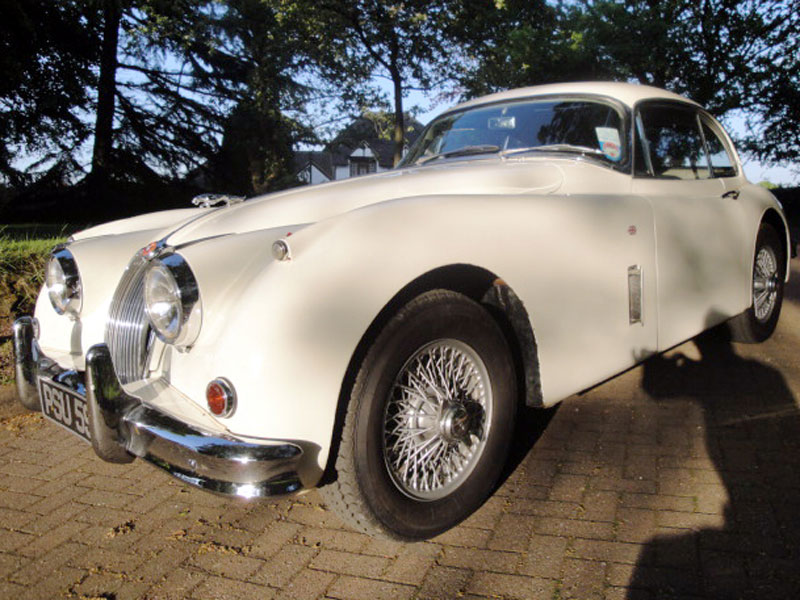 The final iteration of the XK sportscar line and the last Jaguar to carry a separate chassis, the XK150 was introduced in May 1957. While its use of independent torsion bar front suspension, a 'live' leaf sprung rear axle and rack and pinion steering mirrored the practice of its XK140 predecessor the new model benefited from all round Dunlop disc brakes. Stylistically, it was brought up to date with less ostentatious curves and a larger, wrap-around single piece windscreen. The dashboard too was altered eschewing wood trim for padded leather. With the E-type still very much under development, Jaguar was keen to sustain the sporting reputation that five remarkable Le Mans victories had earned it (1951, 1953, 1955, 1956 and 1957). Thus from late 1959 onwards, the XK150 could be had in both 3442cc and 3781cc guises and to normal, 'SE' or ultimate 'S' specification. Credited with 220bhp, 'SE' (Special Equipment) 3.8 litre models boasted a B-type cylinder head, wire wheels, front foglights and a twin exhaust system as standard. Only in production for two years, the total number of 3.8 litre fixed-head coupes has been estimated at just 656.

Leaving the Browns Lane production line as a left-hand drive 3.8 litre Special Equipment automatic model, this particular example has since been converted to right-hand drive four-speed manual plus overdrive specification. Reportedly re-sprayed in Old English White, re-trimmed using blue leather upholstery and treated to new chromework as part of an extensive restoration carried out within the past few decades, work on the Jaguar is further understood to have included a major engine overhaul and the checking over / refurbishment of its running gear. Thought to retain many of its original panels, 'PSU 596' is said to "run cool and drive superbly with good oil pressure". The subject of a recent service and MOT test, the fixed-head coupe is described by the vendor as being in "very good" condition with regard to its engine, gearbox, electrical equipment, interior trim, bodywork and paintwork. While, he adds that: "These XK150s are a classic car man's dream. With their beautiful lines, sporty interiors and ample performance, they represent Jaguar's heritage at its best".

PLEASE NOTE: We have recently been informed that (a) this lot was repatriated from Los Angeles, California in 1982 and (b) the extensive restoration referred to in its printed catalogue description was carried out during 1988-1989. The vendor believes the Californian climate helped preserve much of the Jaguar's original sheet metal and that the mileage accrued since its refurbishment is circa 17,000. Taken on a hundred mile journey following its latest MOT test, the XK150 is stated to have "performed beautifully". A handsome machine, it is apparently accompanied by paperwork dating back to 1982 including a Manufacturer's Statement of Origin letter from Jaguar and numerous old MOTs / tax discs etc.
Share: