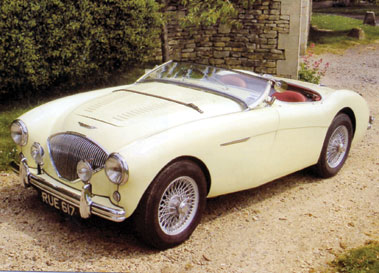 As part of his tireless publicity campaign to promote the newly introduced Austin-Healey 100/4 BN1, Donald Healey entered a team of four pre-production cars for the 1953 Le Mans 24-hour race. Running with standard windscreens, interiors and even bumpers, two of this mildly tweaked quartet survived to finish 12th and 14th overall (an amazing result for such comparatively inexpensive cars in near showroom condition). Eager to capitalize on this success (and also to comply with the event's homologation requirements) Healey persuaded BMC to list a 'Le Mans kit' (twin 1.75 inch SU carburettors, high-lift camshaft, revised distributor advance curve and stronger valve springs etc) in its parts catalogue for 1954. Known officially as part P-280, it was available to fit on new or old models alike and by dealers or private individuals. Adopted by BMC themselves (together with the addition of a louvred bonnet complete with leather strap) for the 100M version of the BN2 100/4 introduced at the 1955 London Motor Show, it has remained a popular modifications package ever since.

Finished in Primrose Yellow with red leather upholstery, this particular 'home market' example is described by the vendor as being in "good overall" condition. Reportedly in single ownership from 1974-2001, 'RUE 617' is further understood to have been extensively restored between 1998 and 2002 with bills on file from 2001 onwards amounting to circa £7,000 (though, the total cost has been estimated at £20,000). Apparently treated to various suspension modifications by another previous keeper - who worked for Rolls-Royce - including fabricated front top links, negative camber top trunnions, Koni shock absorbers and an anti-tramp link to the rear axle, the Healey is also stated to benefit from a later 3000 MK1 four-speed manual plus overdrive gearbox, uprated brakes (3000 MK1 discs, servo, larger master cylinder etc) and 72-spoke wire wheels. Found to have been upgraded to 'M-specification' already, its 2.6 litre engine was nevertheless overhauled as part of the aforementioned refurbishment. Thus, as well as a rare Downton extractor manifold, the unit is reputedly able to boast various balanced components (crankshaft, flywheel, conrods) and a gas-flowed / big-valve cylinder head from John Chatham. While, other work saw 'RUE 617' re-trimmed, rewired and re-chromed as necessary. Perfect for summer fun, this sympathetically enhanced 100 is offered for sale with history file, green logbook and MOT certificate valid until June 2008.