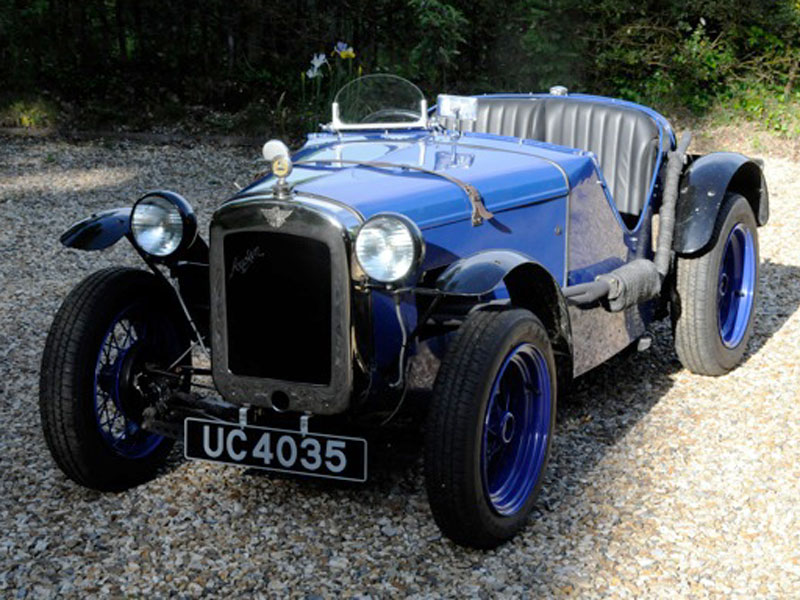 Apparently inspired by the Peugeot Quadrilette, the now immortal Austin Seven was announced in 1922. It is amazing to think that its tiny splash-lubricated 696cc (soon increased to 747cc) engine was the design of an 18-year old draughtsman called Stanley Edge, and the Seven immediately became the smallest four cylinder-engined car on the British market. It featured four-wheel brakes, suspension by semi-elliptic transverse spring at the front, quarter elliptic units at the rear and steering by worm and wheel. Taken to heart by the British public, the Seven remained in production from 1922 until 1939, during which time some 290,000 were produced. It was also manufactured under licence in France, Germany, Japan and America. Many examples were adopted by special builders (Colin Chapman's first Lotus was based on an Austin Seven) or simply run into the ground. The remaining cars are a vital element of the Vintage movement.

'UC 4035' is an evocation of the venerable Ulster model, and was built in the mid '90s to contest VSCC and 750 Motor Club events, where it was evidently very competitive in its class. The Don Rawson modified Austin 7 chassis features a Sports front axle and hydraulic brake conversion (Minor 1000). Power comes from a 32bhp 750cc Austin Seven unit equipped with: 1.5-in pressure-fed Phoenix crank and rods; +80 Australian pistons; Alan Rayburn inlet manifold; 1937 Austin Ruby cylinder head, block, camshaft and exhaust by Tim Myall; an SU HS2 carburetter and 12-volt SU fuel pump. The unit is mated to a Don Rawson three-speed gearbox that drives through a shortened Hardy Spicer prop shaft. The Blue aluminium bodywork was fashioned by Keith Roach and comes with cycle wings and a tonneau cover, while the Ulster bench-type seat is trimmed in Black leather. The 15-inch wheels are shod with Firestone F560 tyres. The batteries, brake slave and master cylinders, and right side rear hub and half shaft were replaced this year, at which time the carburetter was overhauled and all lubricants, filters etc renewed. Currently set up for road use, this fascinating baby Austin can evidently be easily re-converted to full race specification and comes complete with MOT into June 2012 and its own trailer.
Share: