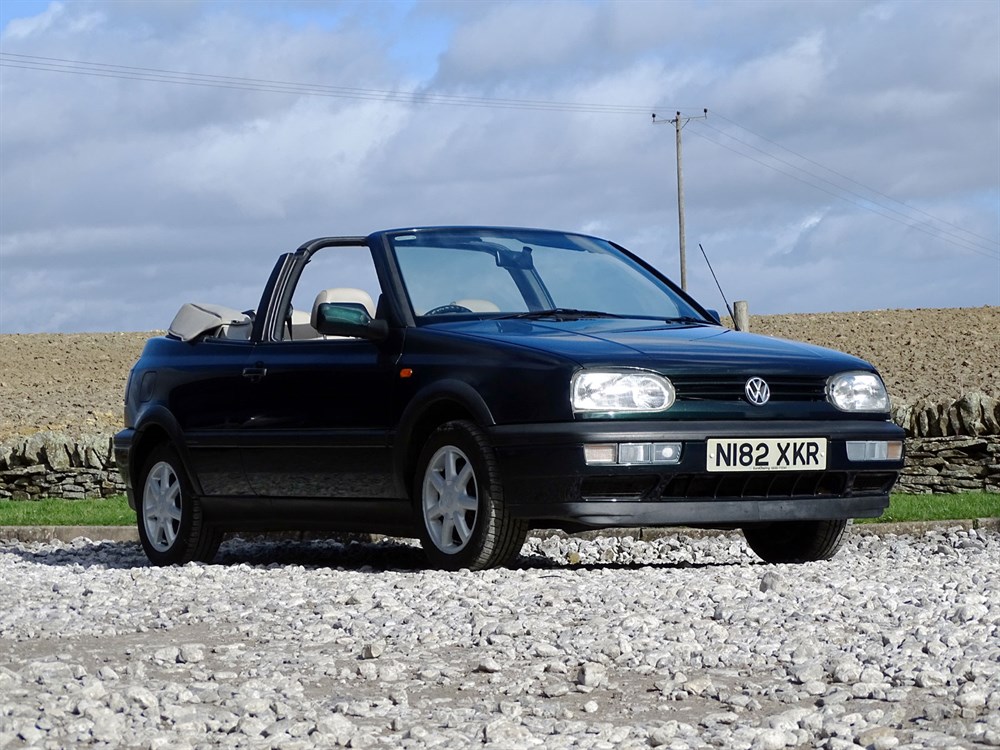 - All service books and manuals present

Finished in green with cream leather upholstery having an electric hood and hood cover. Clearly a well loved and looked after car that remained in one family until 2017, 'N182 XKR' has covered a warranted 36000 miles from new. Riding on alloy wheels it is offered for sale with MOT certificate valid until October 2019 and pleasingly retains its original supplying dealer number plates and rear screen sticker.

As successor to the long running Volkswagen Golf Mark 1 Cabriolet (Wolfsburg having decided against a Mark 2 soft-top), the Mark 3 version was burdened with expectation. Although, not as crisply styled as the earlier Giorgio Giugiaro-penned creation, the newcomer did have the advantage of being based on the 1992 European Car of the Year. A thoroughly modern design, its high-strength two-door monocoque bodyshell featured an integral roll-over hoop and driver's / passenger's airbags. Protected from the elements by a 6-layer quick release hood, the four-seater cabin was suitably cosseting. While, drivers had the advantage of both power-assisted steering (complete with an adjustable column) and ABS brakes. Available in S, SE, Avantgarde and Colour Concept trim levels and with a choice of 1.6 (100bhp), 1.8 (75 / 90bhp) or 2.0 litre (115bhp) engines, the model enjoyed a seven-year production run between 1994 and 2001 (though, later incarnations wore a Mark 4 visage). A decently quick car in 2.0 litre form - contemporary road tests spoke of 0-60mph in 10.4 seconds and 119mph - few would bet against the Mark 3 Cabriolet going the way of its Mark 1 predecessor and becoming a classic.
Share: