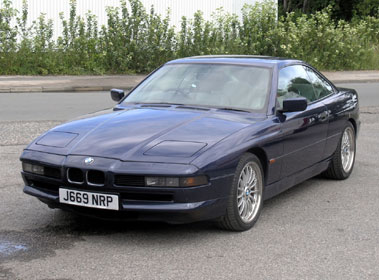 A rare sight on British roads, the 8 Series BMW (chassis code E31) was introduced at the Frankfurt Motor Show of 1989. Though it effectively supplanted the venerable 6 Series (E24), it was in fact conceived as an additional model line and, with more performance and a higher price tag, aimed further upmarket. During its 10-year reign, the four-seat 8 Series was available in 830i, 840i and 850i form, though by far the biggest seller was the 4,998cc, 296 bhp 850i that was manufactured from 1989-94, of which over 20,000 were produced. The V12 engine was mated to either a 6-speed manual gearbox or 4-speed automatic. The fully independent suspension featured struts at the front and coil springs on the rear. Steering was by ball and nut and braking was by discs all round - vented at the front; solid at the rear. Despite an unladen weight of 1790kg, the performance of the 850i was brisk, with the top speed electronically limited to 155mph and the 0-62mph dash accomplished in 6.8 seconds. As befits a top of the range BMW, the 8 Series featured a number of technical innovations, such as its six-speed gearbox, front seatbelt system integrated with the seats and ellipsoidal pop-up headlamps.

The 1992 RHD 850i on offer is finished in metallic blue with white leather interior. The coachwork, paintwork and interior are all described by the vendor as being in "excellent" condition, while he rates the engine as "smooth and quiet" and deems the automatic transmission to be in "good" order. The front discs and pads were apparently replaced at the last full service and the car comes with a recent MOT certificate and a few months of road tax. 850i BMWs are a unique blend of style, performance and the quality of engineering one can rely on from BMW. At today's prices, they are great value for money.
Share: