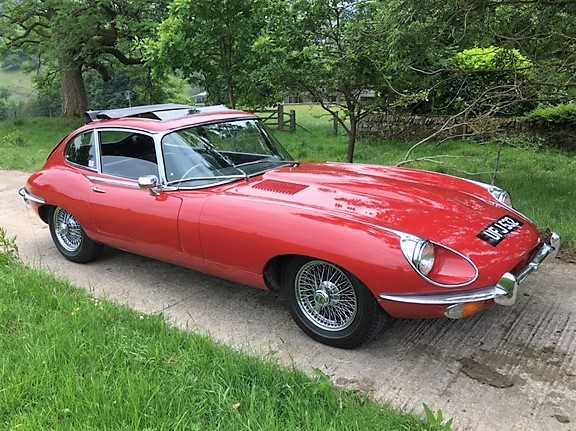 Introduced in late 1968, the Jaguar E-type Series II could be had in Roadster, Fixed Head Coupe or Fixed Head Coupe 2+2 guises. Known in America as the XKE Family Coupe, the latter variant had a notably spacious feel thanks to its elongated wheelbase, raised roofline and larger glasshouse. Equipped with a pair of foldable rear seats, it otherwise benefited from the same fully independent (torsion-bar front / coil-sprung rear) suspension, rack and pinion steering and disc brakes as its two-seater siblings. Powered by a 4235cc DOHC straight-six engine developing a quoted 265bhp (or 246bhp in twin Stromberg carburettor federal specification), it could be had with various options including automatic transmission, power steering and air conditioning. Only in production for a couple of seasons, it nevertheless managed to outsell its two-seater equivalent (approximately 5326 vs 4855) and thus helped convince Jaguar to adopt its basic platform architecture for the forthcoming Series III cars. However, only 1,041 Series II 2+2 Coupes were made to right-hand drive specification.