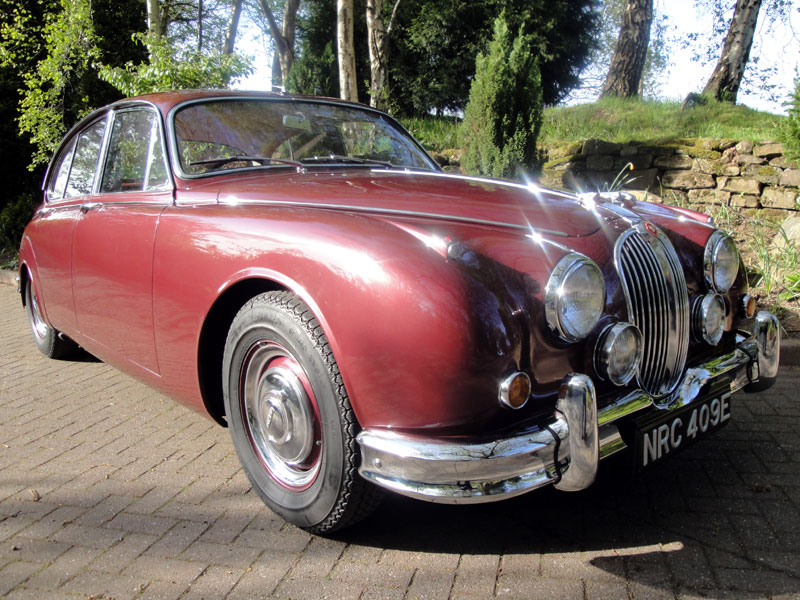 For many the definitive Jaguar sports saloon, the MkII was introduced in October 1959. A peerless blend of elegance and muscularity, its super sleek shape clothed an evolution of the Coventry marque's first monocoque design that had been introduced in 1955. Powered by derivatives of the same XK twin overhead-cam straight-six engine that had swept Jaguar to five Le Mans victories, the MkII was quick to dominate contemporary saloon car racing. Equipped with coil-and-wishbone independent front suspension, a leaf-sprung Salisbury rear axle and servo-assisted four-wheel disc brakes, and blessed with one of the all time great automotive interiors, its stylish instrumentation, rich wood veneers and sumptuous leather upholstery all conspired to cosset and cocoon occupants.

This particular example is said to have benefited from "a 'ground-up' professional restoration costing £26,000 in 1991" after which Ken Jenkins of the Jaguar Enthusiasts' Club reputedly described it as being to "national concours winning standards". Some fifteen years later, during 2006, the Jaguar was cosmetically and mechanically refreshed; a process which reportedly took total expenditure on its refurbishment up to £41,000. As well as a respray and sundry re-chroming, the MkII was given an extensive re-trim (new headlining, carpets and red leather upholstery). Treated to a stainless steel exhaust and reconditioned automatic transmission, the saloon also had its cylinder head overhauled and converted to run on unleaded fuel (via the installation of hardened valves and seats). Judging the power steering-equipped 'NRC 409E' to be in "excellent" condition with regard to its 3.4 litre straight-six engine, three-speed automatic transmission, bodywork, paintwork and interior trim, the vendor adds: "this is a truly exceptional MkII that deserves close inspection. With the last owner for the past 24 years, the car has only travelled to shows. Quality Jaguar MkIIs like this one can be a secure investment and a wonderful pleasure to own - and incredible value for money at a fraction of the restoration cost".
Share: