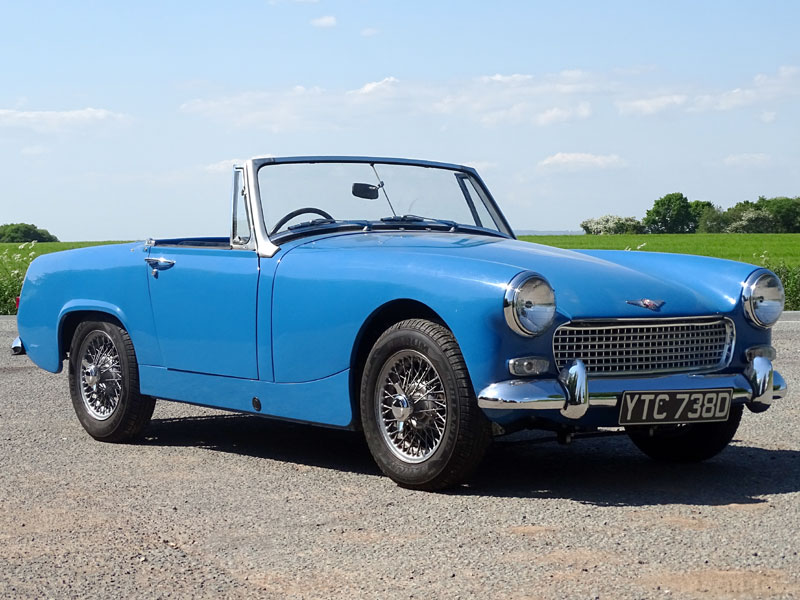 Thanks to its prominent, bonnet-mounted headlights, the original Sprite quickly became known as the 'Frogeye' - a moniker that has stuck to this day. The little two-seater, designed by the Donald Healey Motor Company and built by BMC at the MG factory in Abingdon, was launched in Monte Carlo immediately prior to the 1958 Monaco Grand Prix. The unique, one-piece bonnet covered a mildly tuned, 43bhp 948cc version of the BMC 'A' series engine already found in the Austin A35 and Morris Minor. The suspension was coil spring and wishbone at the front and quarter elliptic springs at the rear, with lever arm dampers all round. The construction was 'integrated' rather than a full monocoque and featured forward projecting chassis legs of the type used in the E-Type Jaguar. The minimal specification excluded exterior door handles and boot lid. Some 49,000 Frogeyes were built between 1958 and 1961. The Sprite was quickly adopted for competition by both privateers and the Works - the latter's first major success being the win of John Sprinzel and Willy Cave on the 1958 Alpine Rally. The model is still proving handy in rallies, races, sprints, hillclimbs and autotests to this day
Share: