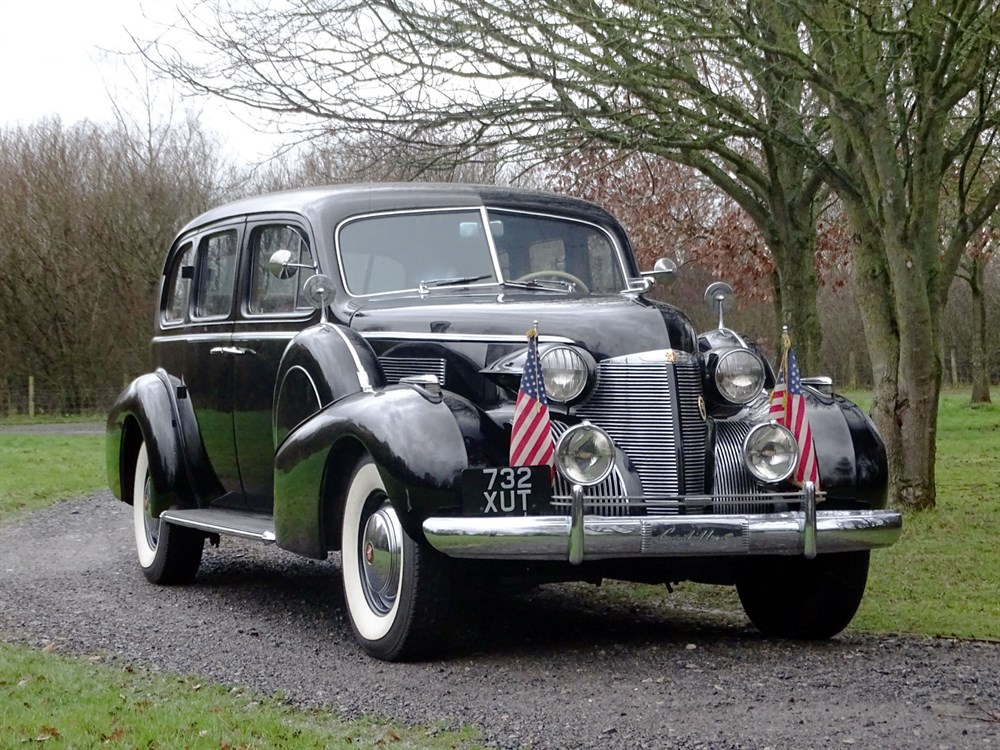 - Subject to a comprehensive restoration whilst in the USA, details on file

From 1936, Cadillac's flagship model was the V8, which came in a variety of body styles including the imposing Series 75, a large seven-seater touring sedan created by Fleetwood, Cadillac's in-house coachbuilders in Detroit. With a 141-inch wheelbase, a 346cid V8 flathead developing a reputed 140hp, hydraulic brakes and a list price of $3102.96, the car was pitched at Cadillac's most exclusive customers.

One such customer - MGM Studios - purchased this car in 1939 to exclusively transport MGM's top box office star and Academy Award winner, Greer Garson. Painted in Raven Black, its bespoke interior was trimmed in Oxblood leather in the front and Oxblood silk to the rear (believed to be original) in deference to Garson's favourite colours, and has 'MGM' monogrammed cushions, flower vases and a hipflask. There are rear and forward-facing occasional seats, no division and it has a number of lovely options including twin side mounts, whitewall tyres, a Wells Gardner radio (upgraded to AM/FM), heater/defrosters and Trippe driving lights. The car has a well-documented and fascinating history, even after the Garson era. It is understood to have appeared in the movie The Good Shepherd, has featured in various club magazines, appeared on a major concours poster, and has various show wins to its credit including AACA and CLC prizes. The history file details a comprehensive overhaul with bills of approximately $50,000 listed between 2001 and 2008, including significant work on the matching numbers engine, the transmission, brake system, shock absorbers and trim. Records show the MOT lapsed in 2010 but the car runs and drives. This left-hand drive Cadillac, one of just 412 made, is now UK registered as '732 XUT', shows 32,685 miles and comes with a V5. Offered with no reserve, this very rare and special car with exclusive one-off touches and wonderful provenance demands the very closest of attention.

A little bit about the late Ian Grange :

Not the tallest man in the world, Ian Grange was nonetheless a very much larger than life character. Born in Stockport, severe dyslexia saw him leave school at fifteen with no qualifications. After doing his National Service, Ian went into the Manchester motor trade. A school of hard knocks that could literally have the shirt off your back (as he found out when purchasing a Jaguar E-Type from Harold O'Connor), the budding entrepreneur learnt to wheel and deal with the best of them setting-up Red Lion Autos in Cheadle before specialising in classic cars and relocating to Chorlton.

A serial nightclub owner as well as a car dealer whose clientele included 'everyone from dustbinmen to lords', Ian traded on both sides of the Atlantic Ocean. Resident in Florida for several years, he could turn a profit on machinery that made more conservative rivals blanch! Never afraid to sit on his stock 'while it increased in value', he professed there was 'a bum for every seat' and sold a fabulous array of classics including a Mercedes-Benz SSK, Lamborghini Miura, Ferrari 275 GTB, AC 428 Convertible, countless coachbuilt Rolls-Royces and Bentleys not to mention numerous outlandish American cars.

A classic car dealer for almost sixty years, Ian was a familiar face at auctions up and down the country. Happy to be bound by one of his irrevocable handshakes and a stickler for punctuality, he remained active up until his death last year. Thankfully, his daughter Samantha Grange-Bailey is picking up where her father left off and will reinvest the proceeds of the collection in further stock

PLEASE NOTE: This Lot has an issue with the brakes.
Share: