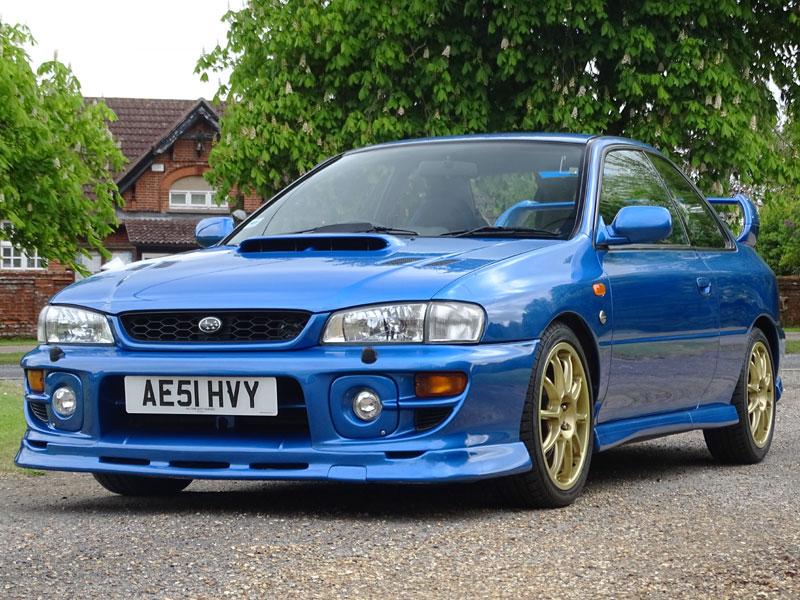 "Ordinary Impreza Turbos sort of tweak playfully with the edges of the laws of physics. The P1 sits down and rewrites them" (CAR Magazine).

Aerodynamically honed by Peter Stevens of McLaren F1 fame and based around a lighter / stiffer two-door bodyshell, the limited edition P1 had more in common with the legendary 22B than its lesser four-door Subaru Impreza WRX siblings. Developed especially for British roads by the company which helped Colin McRae, Richard Burns and Petter Solberg become World Rally Champions, the Prodrive One was intended to counter a wave of 'grey import' STI Type R cars coming over from Japan. More relaxing and forgiving to pilot than a Type R thanks to taller gearing, more compliant suspension and ABS brakes, the 280PS / 343Nm P1 was nonetheless capable of 0-60mph in 4.66 seconds and 155mph.

First registered as 'AE51 HVY' to Donalds Garage Ltd of Peterborough on 5th September 2001, Chassis 827/1000 served as their demonstrator for some three months before being acquired by its first private keeper Ray Brammer Esq. A motor engineer and rally driver who subsequently campaigned an Impreza WRC car, Mr Brammer initially serviced the P1 himself before entrusting its maintenance to the Terrington Service Station of King's Lynn. Although, not main dealers the latter were rally preparation specialists and Subaru exponents. Last treated to a cambelt change and new spark plugs at 68,230 miles (just 600 miles ago), the Subaru felt both indecently rapid and exceptionally sure-footed during a recent test drive. Riding on 'Prodrive by O.Z.' 17-inch alloy wheels, 'AE51 HVY' appears to be highly original even retaining its 'engine cool down' sticker atop the driver's door card. Twice bought by Mr Brammer, the P1 has effectively had just two private registered keepers and is offered for sale with original book pack, stamped service book, P1 booklets and MOT certificate valid until October 2017.
Share: