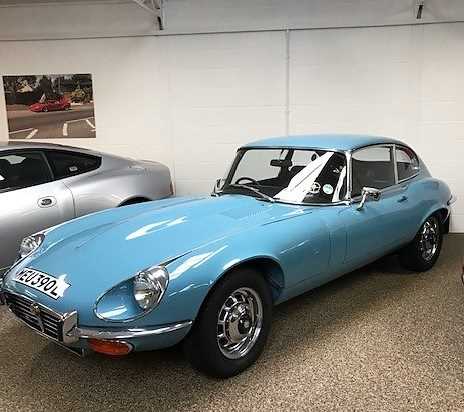 A home market car first registered in Brecknockshire (or so its ‘MEU 390L’ number plate would imply), chassis 1S51314 was acquired by the vendor three years ago. Forming part of a Heritage Display in his family’s Jaguar main dealership, the E-type is said to have ‘benefited from localised paintwork repairs and polishing of the original chrome, while recent mechanical expenditure amounts to just over £3500.00. The car is fitted with a Kenlowe fan and a rear seat belt to the offside. The interior appears to be original, with recently replaced headrest cushions and presents well’. Known to have had just one additional owner during the past twenty-nine years, the Coupe was treated to various restoration works during the 1990s (with invoices to prove). Believed but not warranted to have covered some 59,600 miles from new, ‘MEU 390L’ unusually sports an overdrive switch atop the gear lever of its four-speed manual gearbox. Due to be freshly MOT tested before the auction, this handsome Jaguar is described by the seller as being in ‘very good overall’ condition with regard to its engine, transmission, electrical equipment, interior trim, bodywork and paintwork.