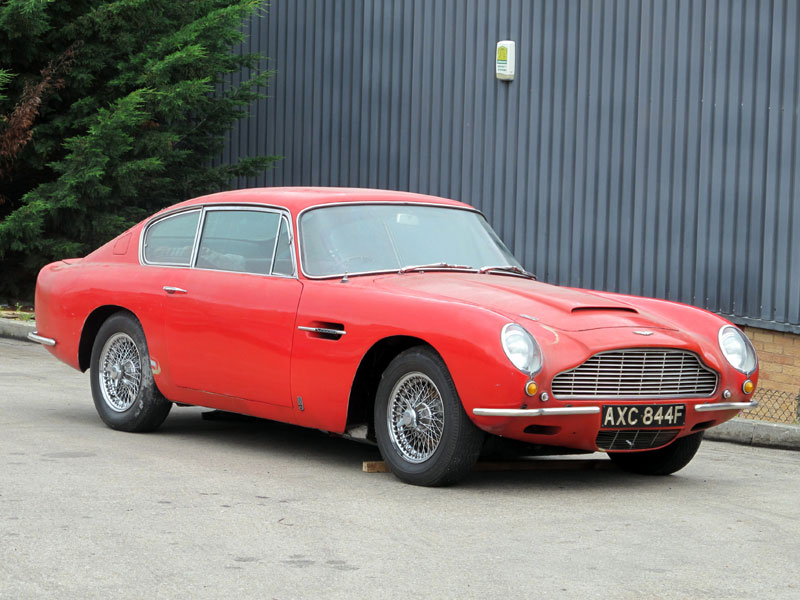 Introduced at the 1965 London Motor Show, the DB6 was notable for being the first Aston Martin model to be engineered following the company's move from Feltham to Newport Pagnell. Although, a direct development of the DB5, with the same visage, the newcomer enjoyed notably better high-speed stability thanks to the provision of a Kamm tail with built-in spoiler, and superior interior space courtesy of a 3.7-inch longer wheelbase and taller roofline. Grafted over a sheet steel platform chassis, the four-seater's hand-finished aluminium panels helped contribute to the claimed kerb weight of 3,232lbs that was actually only 17lbs heavier than its predecessor. Praised by the contemporary motoring press for its poise and handling, the DB6 employed all-round coil-sprung suspension, four-wheel disc brakes and rack-and-pinion steering. Powered by the fabulous Tadek Marek designed 3995cc DOHC straight-six engine, the model could be had in standard tune, with 282bhp, or in Vantage form with a trio of triple Webers; in which case the output was 325bhp. Either unit could be mated with five-speed manual or automatic transmission. A contemporary road test by the legendary John Bolster achieved 6.1 seconds for the 0-60mph sprint and a maximum speed of 152mph.

A Mark II version of the DB6 was unveiled in August 1969 and is identified by its lightly flared arches housing the hubs and wider wheel/tyre package of the DBS. The seats were also shared with the then-new DBS. A fresh option was that of AE Brico electronic fuel injection. However, the system lacked proper development and many of the engines concerned were later converted by the Aston Martin service department to run on Weber carburettors. Some 1,750 DB6s were manufactured by the time the model was fully superseded by the DBS in February 1971, making it the most successful member of the DB4/DB5/DB6 lineage.

This particular example - chassis number DB6/2929/R - is believed to be one of just 268 right-hand drive DB6 MKI Vantage cars built by the factory. Equipped with the preferred five-speed manual gearbox, the high performance GT was registered to its first owner during May 1967. Originally finished in Blue, it was resprayed White prior to the current ownership and Red since being purchased by a car-loving, Cheshire-based marine engineer in late 1974. Though he worked abroad most of the time, he still found time to attend numerous Aston Martin Owners' Club meetings in the North-West of England. However, he sadly died in 2005 and, though 'AXC 844F' was apparently MOT'd as recently as April 2009, it has basically been garaged and left unused since his passing, and is now being sold by his heirs complete with: original owner's manual, continuation log book, a few invoices and some old MOTs and tax discs. The odometer currently displays an unwarranted 67,085 miles. Seemingly complete (quarter bumpers aside) and able to boast 'matching' chassis and engine numbers, it has the makings of a rewarding restoration project.
Share this page: