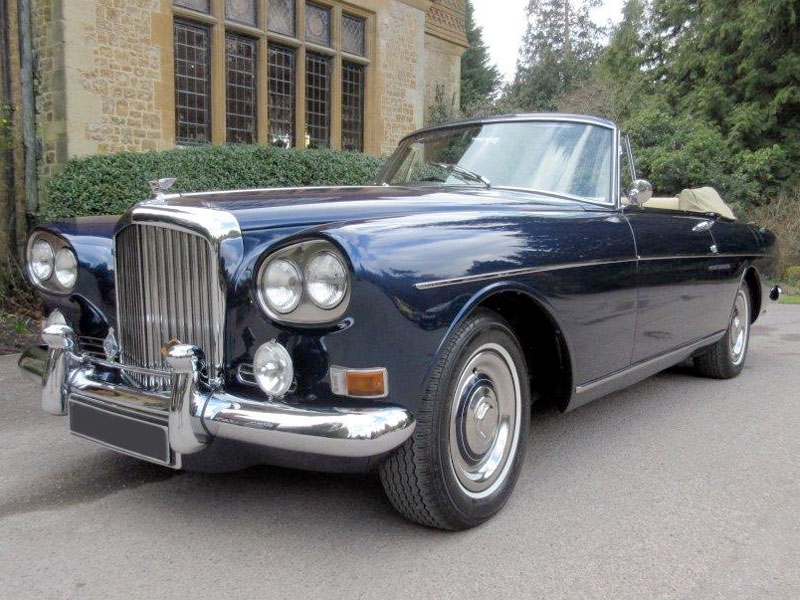 The first owner of this handsome Continental was Patrick Greenhous, the then chairman of the large motor group Vincent Greenhous Ltd. It was specified with heavy gauge chassis, manual aerial, and electric windows complete with emergency handle. The factory build sheets confirm the chassis being despatched to Mulliner Park Ward on February 25th 1965 and the Bentley being collected by a representative of the supplying dealer, Charles Attwood Ltd, on the ensuing June 4th. At this stage the Continental - 1 of just 58 right-hand drive examples bodied by MPW to design number 2006 - was finished in Valentine's Ming Blue and trimmed in a combination of Off-White Connolly leather, and Beige carpet and headlining teamed with a Dark Blue Everflex hood. The keeper's son evidently recalls the Bentley replacing an Aston Martin DB5 Convertible; also being collected from Radley College in the Bentley and being taken to lunch at The Bear, Woodstock. The Bentley was evidently one of numerous special cars owned by Mr Greenhous, that included a Lamborghini and Jaguar E-Type as well as several Rolls-Royces that he used with and without the presence of his chauffeur.

By 1987 the Bentley was in the US, where it was reputedly registered 'ABT 475' and employed as a wedding car - the certificate of title notes the mileage at this time was 37,900. Two years later it was sourced by Bentley specialist Edward Hamilton on behalf of Mr Roger Taylor of Essex, whereupon it was returned to the UK and re-registered 'NME 86C'. During this period it was maintained by Hamilton as well the renowned marque specialists P&A Wood. It was while engaged in a Bentley Drivers' Club event that the car met its next keeper, Mr Roger Fowler of Worcestershire, who retained it for just over a year before selling it with 63,000 miles displayed to TV executive and producer John Ranelagh of Cambridgeshire on May 14th 1996.

He in turn covered 6,000 miles in six years before trading it in to dealer Cars International, from whom it was acquired by businessman Mr Philip Derby of Surrey on April 25th 2002. It was during his care that the Bentley was treated to a 27-month long refurbishment by the Fullbridge Restoration Company. It was stripped to bare metal and all corrosion removed before the body was primed and refinished in its original livery of Valentine's Ming Blue. The trim was carefully refurbished and new carpets and hood installed. The brightwork was replated as required, new valve guides fitted to the engine, and all other mechanical parts checked and seen to as required. It was at this stage that air conditioning was installed in anticipation of some hot Continental motoring. Fullbridge's total bills added a further £50,000 to the purchase price of £45,000. The finished vehicle was subsequently employed on a number of Continental tours before the engine was overhauled in 2005 by Bentley Pangbourne at a cost of £18,646.

Having provided pleasure for Mr Derby, the Bentley was consigned to a de-humidified bubble from 2007 until April 2012, at which point it was acquired by its most recent keeper. Following an extensive overhaul that included a new steering box, he and his wife enjoyed a 14-day round trip to the Monaco Grand Prix with no problems whatsoever. Now under used, this lovely Bentley is being made available for a new keeper to benefit from. It is being sold complete with an MOT valid to March 14th next year and 18 past ones confirming the current indicated mileage of 91,501. 'DUJ 888C' is one of those motorcars that will cut a dash wherever it goes and could continue to appreciate in the process.
Share: