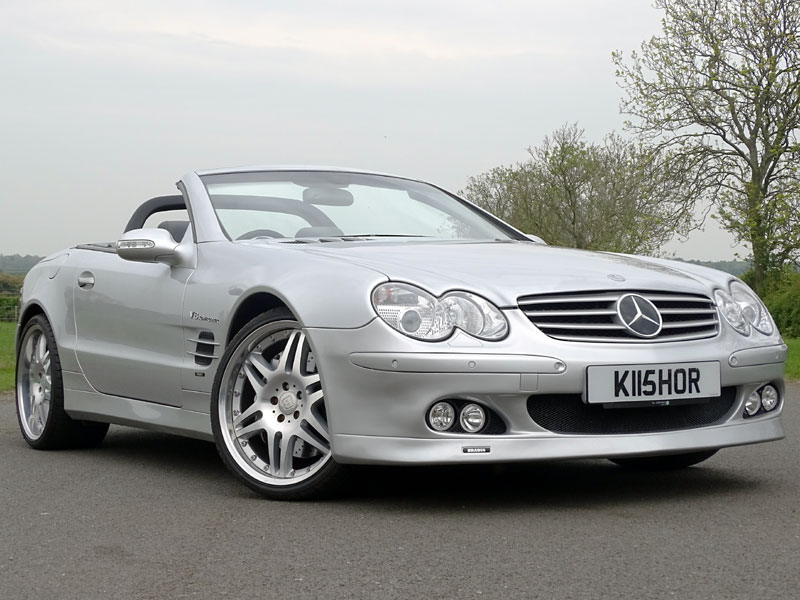 - Offered with an MOT certificate into March 2018

The mighty Brabus K8 was launched at the Geneva Salon in 2002. Based on the Mercedes-Benz SL55 AMG, it included a performance kit for the supercharged engine that raised output to 530bhp and stump-pulling torque of 572 lbs ft; the combined effect of which was an electronically-limited top speed of 186.4mph and a time for the 0-60mph dash of 4.4 seconds. The relatively subtle aero parts comprised a replacement front spoiler, side skirts that feature automatic illumination of the ground whenever the door is opened, and a rear diffuser. To further improve the handling, the Brabus version of the car is lowered by 15mm. The interior options included stainless steel doorsills with illuminated Brabus logo, ergonomically shaped sports steering wheel with airbag and heated rim, and genuine carbon trim.

The very smart-looking righthand drive sale car's additional upgrades are understood to include 20 inch diameter Brabus Monoblock six-spoke alloy wheels, sports exhaust, safety roll over bar and front and rear mats. The big Benz is finished in Metallic Silver and trimmed in Grey hide. It has had just three owners from new, who between them have travelled no more than 20,200 miles - the car having been dry stored from 2010 to 2016, as confirmed by the service stamps that relate to March 2006 (4,782 miles), July 2008 (13,086 miles) and November 2016 (13,511 miles). `K115 HOR' is now being offered complete with original pack of handbooks and service record, plus an advisory-free MOT into March 2018.

The R230 series or fifth generation SL was produced from 2001 to 2008, complete with retractable hardtop (Vario Roof) as had been available on the more junior SLK since 1997. The model was launched with just a 5.0-litre normally aspirated V8, but the following year saw the option of the SL55 AMG with 5.4-litre supercharged powerplant.

PLEASE NOTE: The third service stamp mentioned in the catalogue is incorrect, however it is further stamped as follows: