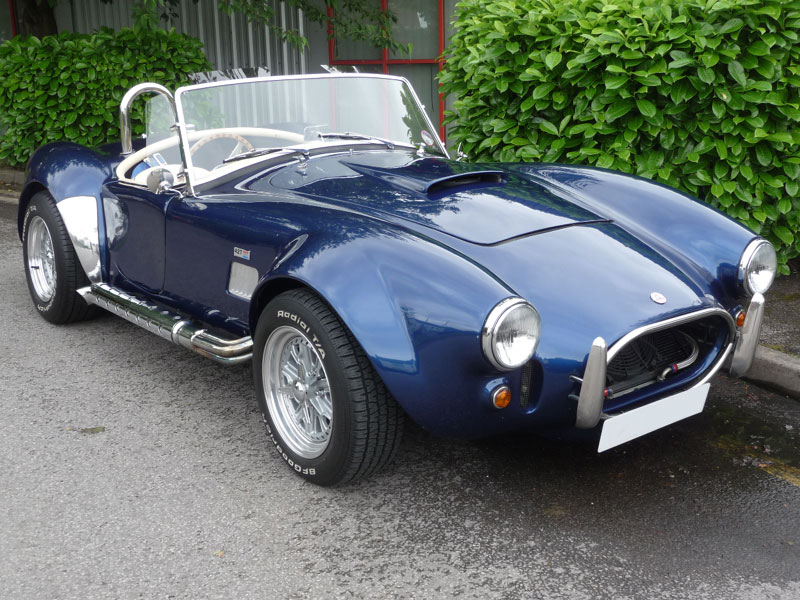 The iconic Cobra was born when Texan Carroll Shelby shoe-horned Ford's new lightweight 260ci V8 into the nose of the John Tojeiro designed AC Ace. The resulting car was a winner from nose to tail, and in later 289ci and 427ci guise accounted for countless race and championship victories on both sides of the Atlantic. Under the circumstances it is now hard to believe that the final road-going versions were slow to find homes. Fast forward 15 years or so, however, and original Cobras were suddenly escalating in value, quickly shooting way beyond the reach of most enthusiasts for ever. Almost overnight the market for evocations was born.

Finished in (BMW) Metallic Blue with Blue-piped Magnolia upholstery, this particular example was built-up from a rare Mark Phillips MKIV Cobra kit by the late Carl Spencer, a talented diver who was involved in expeditions to Donald Campbell's Bluebird, the Titanic, the Carpathia and the Britannic (there is a plaque in the car's engine bay confirming it was assembled by him during 1997). He sadly lost his life returning to the Britannic in 2009, as part of a 17-strong team commissioned by National Geographic to survey and film previously unseen areas of the wreck. 'VJF 426X' is now being sold on behalf of Carl's widow and two children.

Listed as a Mark Philips on its V5C Registration Document, the car's suspension, brakes and differential etc were sourced from a Ford Granada. Powered by a 351ci (5.7litre) Ford Windsor V8 (complete with nitrous oxide kit) coupled to five-speed manual transmission, the two-seater features chromed side exhausts and rides on replica Halibrand alloy wheels. The roadster comes complete with a copy of the build manual, and is expected to have a fresh MOT by the time of the sale. The current odometer reading of just 4,574 miles is thought to be correct.
Share this page: