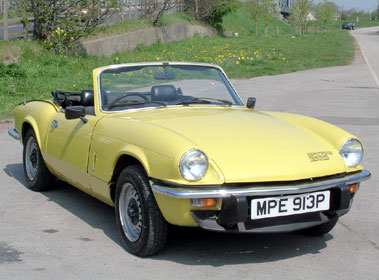 The prototype Spitfire was produced by Standard Triumph in 1957. It was based on a modified Herald chassis clothed in a swooping body penned by Giovanni Michelotti. Unlike the rival Austin-Healey Spirite, it featured wind-up windows; also a single-piece front end that folded forward to provide optimum access to the engine bay. There was much support for the car, however, production was initially impossible due to Standard Triumph's dire financial situation. Indeed, it was eventually delayed until 1962, by which time the company had been taken over by Leyland. The original production engine was the 4-cylinder 1147cc unit from the Triumph Herald, mildly tuned for the Spitfire with twin SU carburettors. The car featured rack and pinion steering, wishbone front suspension and a transverse leaf swing axle arrangement at the rear. Introduced in 1974, the final iteration of the Spitfire was called the 1500, in deference to its 1493cc engine. By then the car's much criticised rear suspension had been fully sorted and the car progressively developed inside and out. By the time production ceased in 1980, over 95,000 examples of the popular 1500 had been built - the largest run of all the variants.

The RHD car on offer is finished in yellow with black vinyl trim. It has remained in the same ownership since 2000 and has MOT certificates dating back to 1988, since when it has covered a mere 12,000 miles and is believed but not warranted to have done only 74,000 all told. Last year it was apparently treated to an extensive overhaul, for which the bills are supplied. Coachwork, paintwork and trim are all described as "good", as are the engine and transmission, and the car is MOT'd until April 2010. Spitfires were a key part of a golden age for British sportscars and are still capable of providing reliable, fun, wind-in-the-hair motoring at a very affordable price.
Share this page: