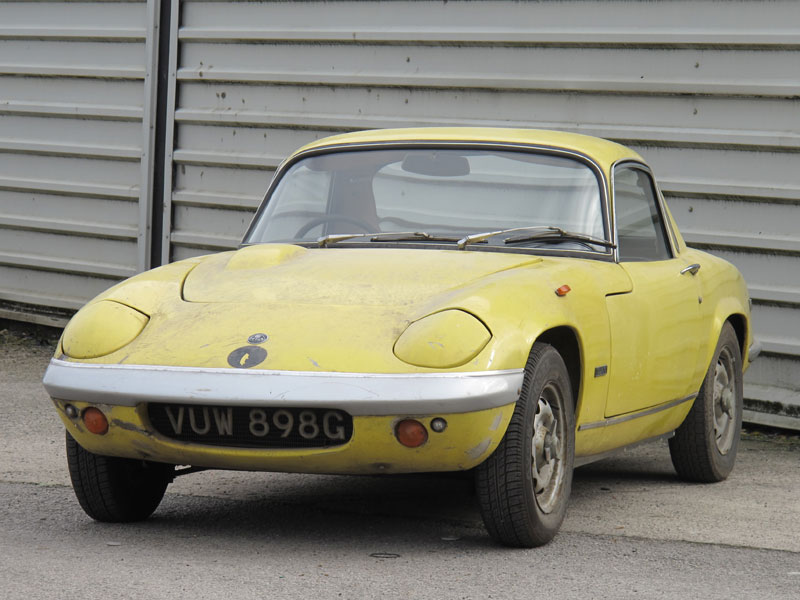 - 1 owner from new, highly original and 'pin sharp' to drive

The brainchild of Ron Hickman, Lotus's Elan was introduced at the 1962 Earls Court Motor Show and promptly redefined its class in terms of ride, handling and performance. One of the most desirable versions, the S4, arrived in March 1968. Characterised by its wider wheelarches, revised interior and brake servo, the variant was capable of 0-60mph in 7.8 seconds and a top speed of over 120mph. With more power (118bhp) and a close-ratio gearbox, SE derivatives were quicker still.

The delightfully unmolested S4 SE Fixed Head Coupe being sold is a 1969 model finished in Lotus Yellow and trimmed in Black vinyl. Its somewhat unkempt appearance belies the fact that 'VUW 898G' is a genuine one owner car that has seen regular use. Moreover, under the careworn paintwork lies a galvanized Lotus replacement chassis, the installation of which formed part of an extensive 'nut and bolt' restoration of the running gear by leading marque specialist Miles Wilkins of Fibreglass Services. Lotus OEM parts were used wherever possible and the car's history file contains related invoices approaching £10,000 in value. A true enthusiast, the Fixed Head Coupe's sole registered keeper was careful to preserve its speed blade wipers, small thumb-latch boot handle, Special Equipment sill strips, interior chrome coat hooks, dashboard, crash pad and original locks (one key fits all). Built before a factory fire distorted the Elan's body moulds, the S4 enjoys notably good panel fit / gaps. The vendor currently grades the DOHC engine and four-speed manual gearbox as 'very good', the original bodywork and interior trim as 'good' and the paintwork as 'average'. He tells us that 'VUW 898G' drives notably well and is offering the car complete with a plethora of old MOTs plus the aforementioned bills. Thus, the next keeper can decide whether to complete the restoration or just enjoy this well-sorted example as is.
Share: