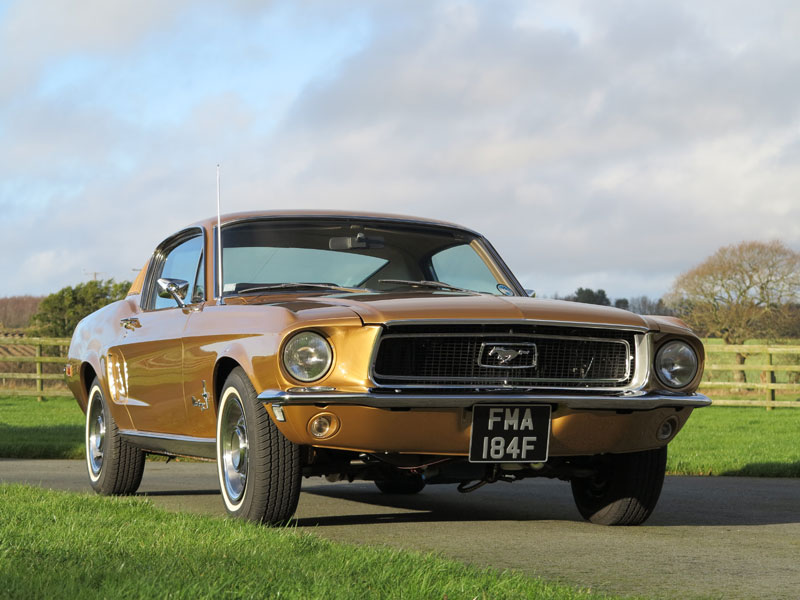 - Built at San Jose on 30th November 1967 and supplied new via Holiday Ford of Sunnyvale, California

- Restored to concours standard in its original livery

Faced with increasing competition from the likes of the Chevrolet Camaro and Dodge Charger, Ford opted to comprehensively re-style its class-leading Mustang for the 1967-model year. Sporting a jutting grille, concave rear panel and widened sheetmetal, the newcomer was not only more visually imposing than its predecessor but also able to accommodate larger engines. Notable as the first Mustang to be fitted with a 'big block' V8, the 390 'S' code could be had in Notchback, Convertible or Fastback guises. The best-looking variant, the latter was deemed suitable transport for Lieutenant Frank Bullitt in the iconic film of the same name. Needless to say numerous '67 and '68 Fastbacks have since been repainted Highland Green so as to ape the 'king of cool' Steve McQueen's most famous movie mount (some even began life as authentically-powered 390 'S' code cars).

Formerly the property of Jeff Taylor, the founder of Monster.com, chassis 8R02S105660 was extensively restored for him by Tango Classic Autos of Bellingham, MA (which he also owned) during the early / mid-2000s. Perhaps the most telling invoice with regard to the lengths gone to during the rejuvenation is one for a 'National Judging Rule Book 64.5 to 73'. Tango Classic Autos morphed into Cape Cod Mustang following its acquisition by Bret Matteson in 2007 but the re-branded firm's website still contains mention of the Fastback: 'This 390 '68 Mustang has been totally restored to "concours trailered". It is a factory Non-GT "S" Code 390 Mustang that has had a no expense total restoration. The 390 engine as well as the total drivetrain has been rebuilt including the C-6 transmission and third member. This solid San Francisco Fastback was disassembled and the body has been restored ground up. Red primer, over spray and correct engine compartment details were added to this restoration. Many N.O.S. parts were used throughout the automobile and the engine compartment was finished with many rebuilt 390 parts including the hard to find smog system. This is a totally restored 1968 Mustang with the very popular 390 engine. Beautifully restored, it is ready to be shown'.

Sparingly used since entering the current ownership during 2012, the Ford is believed to have covered just 700 or so post-refurbishment miles. Quite possibly the most impressive Mustang restoration that we have yet encountered, 'FMA 184F' remains highly presentable and boasts a wealth of correct detailing even down to its door tag rivets, engine bay / boot stickers, seatbelt labels and exhaust system markings. Worthy of very close inspection, this 'California Dreamin' 390 'S' Code Fastback is accompanied by a V5C Registration Document, MOT certificate valid until June 23rd 2016, handbook and history file.
Share this page: