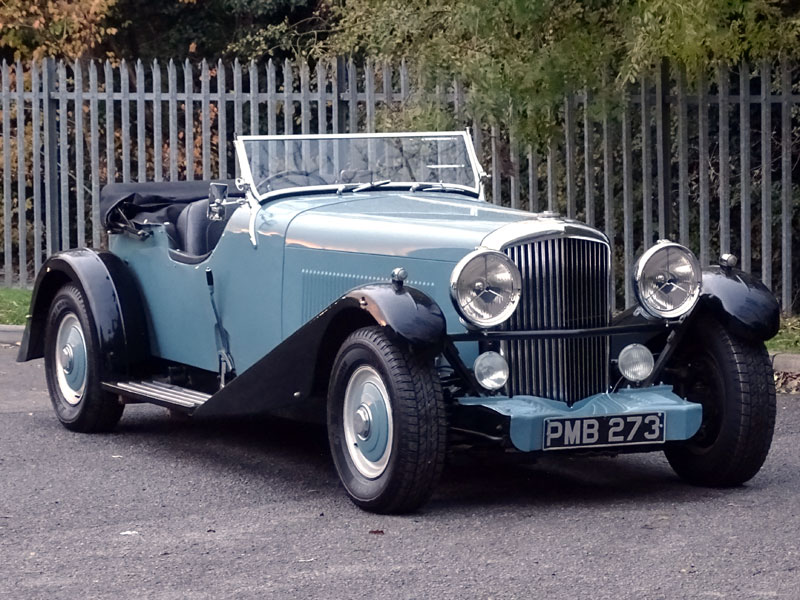 - Built by a former director of Rolls-Royce motorcars, and professional engineer, in the 1990s as a tribute to the 'Scalded Cat' Bentleys

- Powered by a 6.5 litre Rolls-Royce B81 straight-eight engine allied to automatic transmission

- Veteran of numerous rallies including the Bentley Drivers' Club's Tour of South Africa in 2003 (c.4,000 miles)

Rolls-Royce built two straight-eight powered Bentleys using the 'B'-series eight-cylinder variant of the standard six-cylinder engine (one of which was loaned to HRH Prince Philip who was apparently reluctant to hand it back). These were dubbed 'Scalded Cats' and in the mid-1960s Robin Moore started to plan a similar car based on a R-Type Chassis. He was working in the experimental department of Rolls-Royce at the time and an internal memo dated August 1965 sees him asking if any ex-test cars would become available.

This plan did not come to anything with the acquisition of an S1 Continental Convertible in the late 1960s consuming all available time and cash and the collapse of Rolls-Royce and his move to Surrey to work for W. S. Atkins closing off further progress.

In the mid-1980s he had bought a Harry Rose-bodied MkVI Special and his interest in a B80-engined special was reignited. He acquired a Thorneycroft Nubian Fire Engine for its powerplant and an R-Type that had rotten coachwork but a sound chassis and running gear was also sourced. The body was stripped off the Bentley and work started on modifications to the chassis. The cruciform was cut and the front section moved back in the chassis by twelve inches. The front chassis side rails were extended and reinforced to provide space for the longer engine. All of the running gear was overhauled and meticulously reinstated.

An elegant open tourer body was designed and commissioned in traditional ash framing and aluminium panels and the car was completed in late 1992. During the development, a B81 with its larger capacity of 6.52litres had been found and this replaced the B80. The R-Type automatic gearbox was retained and an R-Type Continental back axle ratio fitted which with the 17-inch wheels, provides relaxed cruising. At this stage he was persuaded that an elegant blue and grey colour scheme was preferable to the bright red he had envisaged to fit with the name.

Used and enjoyed for numerous trips around the UK, the Special also ventured as far afield as South Africa for the Bentley Drivers' Club's 2003 tour of that country which saw participants cover circa 4,000 miles!

However, the B81 engine that had been fitted was from an army training establishment and it became clear that it had had a hard life. In 2008 the opportunity came up to buy a brand new, unused B81G which is the variant of the B81 designed to run on propane or natural gas. It therefore has a much higher compression ratio - increased from 6.4:1 to 8.0:1 which modern fuels can run without any issue and provides a further boost in output to ensure that it is, in Rolls-Royce terminology 'adequate' (a standard B81 unit is estimated to develop 220bhp and 330lbft of torque).

A full and detailed history is provided with the car as is weather equipment and a MOT certificate valid until October 2017.
Share: