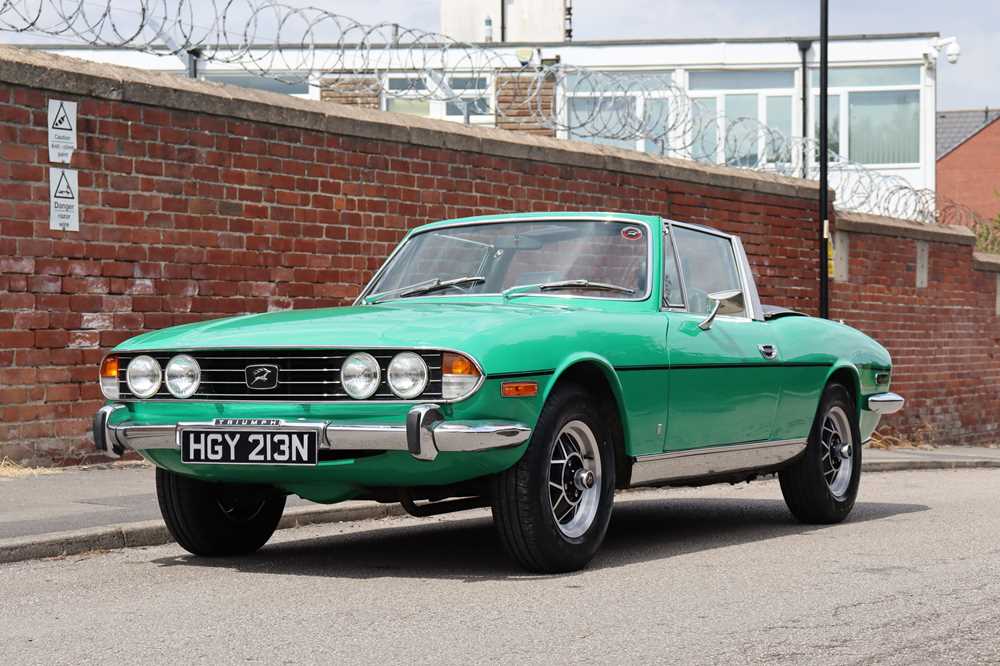 Introduced in June 1970, the Triumph Stag was conceived as a luxury convertible sportscar to rival the likes of the R107-series Mercedes-Benz SL. As such, it came equipped with electric windows, power-assisted rack and pinion steering and servo-backed disc/drum brakes as standard. Based around a two-door monocoque bodyshell (stylist Giovanni Michelotti had physically shortened a pre-production Triumph 2000 saloon in order to fashion the initial prototype), the newcomer featured all-round independent suspension (McPherson strut front / semi-trailing arm rear) and a well laid-out 2+2 cabin. Neatly integrated, the substantial roll-over hoop that joined the B-pillars gained extra strength from a T-bar link to the windscreen frame. With some 145bhp and 167lbft of torque on tap from its bespoke 2997cc SOHC V8 engine, the model was reputedly capable of 120mph. Available with a choice of four-speed manual or three-speed automatic transmission all but the earliest Stags benefited from both hard- and soft-top roofs. Despite being in production for seven years during which time 25,877 cars were made, a mere 9,500 or so are thought to have survived.

Dispatched via Greenwich Automobiles Ltd. of Stockwell Street, London to its first owner on the 22nd of May 1975, ‘HGY 213N’ cost some £4,182.15 when new. Fitted with the 2997cc V8 engine allied to the desirable four-speed manual transmission with overdrive, the Stag was finished in Java Green with Black interior upholstery and hood and was specified from new with a body-coloured hard-top, all of which still presents with today. The further specification included Sundym glass, a laminated windscreen, and alloy wheels. Displaying a recorded mileage of 67,532 miles (at the time of consignment), the Stag has a large number of MOTs back to 2001 when the mileometer read 54,554 miles.

Subject to a bodywork restoration during the year 2000, the Stag is accompanied by a sizeable history file which displays a large number of invoices for expenditure across many years. Also present is the original purchase invoice from Greenwich Automobiles Ltd.; the aforementioned large number of previous MOTs; the original driver's handbook, wallet and Passport to Service; a Repair Operations manual; a no advisory MOT certificate until July 2023 and a current V5C document showing four former keepers.