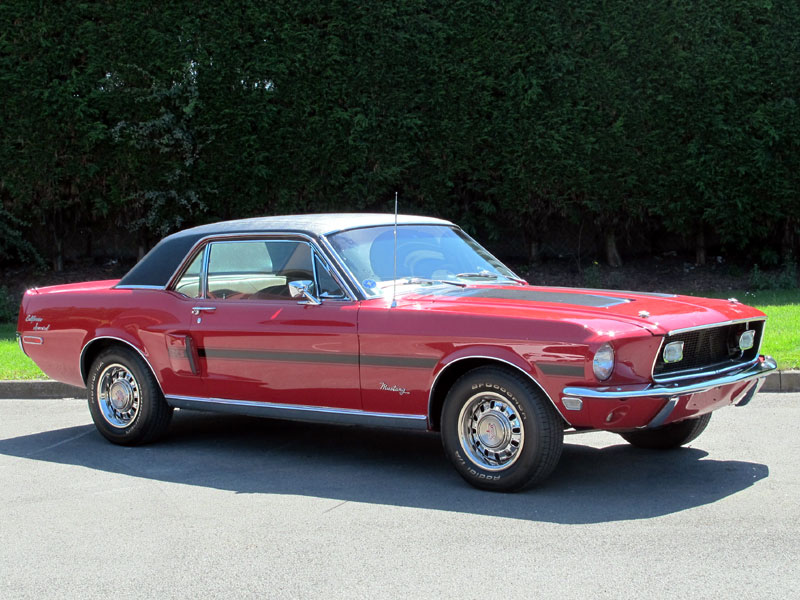 Ford's immortal Mustang had its inaugural public viewing at the New York World's Fair of April 1964. It was the first of the so-called 'pony' cars that subsequently included the Chevrolet Camaro, AMC Javelin and revamped Chrysler Barracuda. The newcomer also inspired such Coupes from elsewhere in the world as the Ford Capri and Toyota Celica. It was styled in house under the direction of Joe Oros and utilised as many components as possible from the existing Falcon and Fairlane models, in order to minimise cost. Soon available in Coupe, Convertible and Fastback guise, the Ford could be bought with a range of straight-six and V8 engines.

The 1968 Mustang on offer is one of only 4,118 California Special (GT/CS) limited edition Fords engineered by Shelby Automotive to the requirement of the California Ford dealer network. The GT/CS's unique specification included: Marchal or Lucas Fog Lights, twist-type DZUS bonnet pins, side scoops, pop-open fuel cap, rear spoiler, and 1965 Thunderbird taillights. Side stripes with the 'GT/CS' die-cut logo along with a rear bootlid stripe were included and available in White, Black, Red, and Metallic Medium Blue. The model was available in all standard 1968 Mustang colours, and all engine and transmission combinations.

This award-winning GT/CS is equipped with a 289ci (4.7litre) V8 two-barrel carburettor engine allied to automatic transmission. The vendor informs us it has the been the subject of an extensive 'rotisserie' restoration in the past and was previously owned by Andy Salemi of Sycamore, Illinois who kept it in a Carcoon, and won the Carl F. Benz Trophy at the 2006 Geneva Concours d'Elegance with it - there are numerous photos in the album that accompanies the vehicle. According to the vendor, "the car's undercarriage is as clean as the roof and the engine compartment is true to the original specification and beautifully detailed".