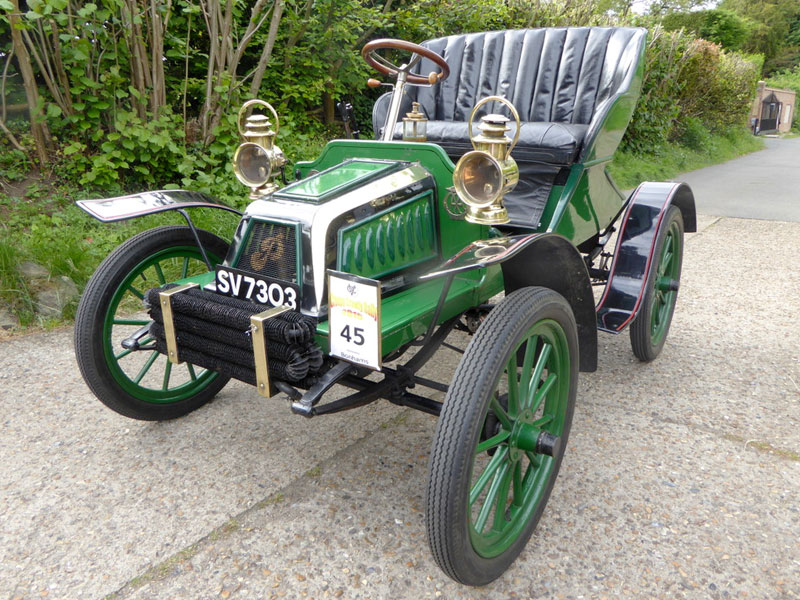 Pope-Tribune was one of a group of four companies founded by former civil war officer Colonel Albert Pope that were dedicated to the manufacture of petrol-engined motorcars - he had another that concentrated on electric-powered ones. Production was established in the old Crawford bicycle factory, Hagerstown, Maryland, USA and run by the colonel's son, Harold. The first product was a single-cylinder two-seater runabout designed by Hiram Percy Maxim, the son of Sir Hiram Stevens Maxim, the inventor of the Maxim gun. The improved Model 2 featured a front-mounted single-cylinder engine of 798cc, wheel steering, two-speed sliding pinion gearbox, and shaft drive to a bevel rear axle complete with differential. In 1904, the Model 2 was priced at a princely $650, but this was lowered the ensuing year to a more attractive $500.

The righthand drive 1904 Model 2 being sold was imported to the UK in 1992/1993 by a Mr John Danison. It was granted VCC dating the following year before being sold to a Mr Richard Ashby in 2005. The vendor acquired 'SV 7303' in 2007 and has clearly put it to good use, as the veteran's history file includes a certificate to prove it completed the 2014 London to Brighton Veteran Car Run (the accompanying paperwork also features a letter of acceptance for this year's event that takes place on November 1). Furthermore, earlier this year both car and owner successfully completed the 90 mile long VCC Creepy Crawley rally.

The Pope-Tribune is finished in an attractive shade of Green complemented by Black cycle wings and Black leather seating, all of which are considered by the vendor to be in 'good' condition; as is the transmission, bodywork and the colour-keyed artillery wheels on which the car rides. The engine was apparently overhauled and fitted with a new cylinder block last year, at which time the electrical system was also replaced.
Share this page: