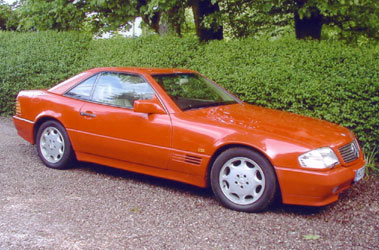 Faster, harder-edged and more driver-orientated than its R107 predecessor, the Mercedes-Benz R129-series SL was launched at the 1989 Geneva Motor Show. Brimful of cutting-edge technology, its impressively rigid two-door monocoque bodyshell featured an integral rollover bar that deployed in less than a third of a second (if the car ever sensed an impending flip) and a fully automatic convertible roof. Known for its sure-footed handling, the R129 utilised all-round independent suspension, ABS brakes and power assisted steering. Propelled by a variety of six- and eight-cylinder engines all allied to automatic transmission, it was the sportscar of choice for many contemporary F1 drivers. Reputed to develop some 188bhp and 192lbft of torque courtesy of its 2960cc SOHC straight-six, the 300 SL was a paragon of refinement (despite its claimed ability to sprint from 0-60mph in 9.0 seconds and onto 142mph).

Finished in red with cream leather upholstery, this particular example is variously described by the vendor as being in "good" (paintwork, automatic transmission) or "very good" (bodywork, engine, electrical equipment, interior trim) condition. Believed but not warranted to have covered some 77,000 miles from new (a figure partially substantiated by "seven service stamps up to 70,000") 'H372 RKG' further benefits from "a factory hardtop, electric seats / mirrors / windows and alloy wheels". Reportedly "used very little" since entering the current ownership via our June 2007 Buxton auction, recent work is nevertheless understood to have seen the convertible treated to "four new tyres". A practical year round proposition, this attractive 300 SL is offered for sale with MOT certificate valid until June 2009.