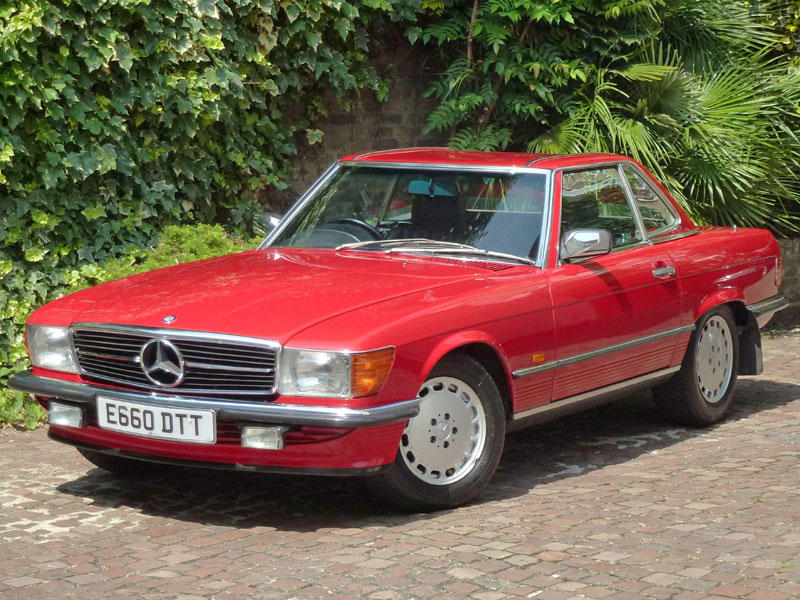 Within the volumous history file for this 300SL lies a note book that the forth owner used to fanatically document every journey they did in the car, noting the mileage covered, the reason for the journey, and the weather conditions. However, the first owner was apparently a Matthew Giles who bought E866 DPC (as it was registered then) new on August 1st 1987 and owned it until October 1992. Ownership then passed to someone from West London, but after five months it is believed to have been repossessed by the finance company and then stored for fourteen months while the hard top was retrieved. In May 1994 it was purchased by a Roger Thomas of Devon and registered with his number plate RCT 8. A copy of a maintenance invoice from this time records the mileage at about 17,300 miles. Mr Thomas seemed to struggle with the lack of space in the SL and after travelling about 1,600 miles removed RCT 8 from the car and placed an advert in the Sunday Times expressing an interest in taking a saloon car in part exchange. E660 DTT was purchased by John Earl in October 1994, the fourth owner, and was clearly cherished. He moved to Hull in May 2004 and after the car was unused during 2005 and 2006 he entered it into our auction at Duxford in October 2007. It was acquired by our Mercedes-Benz enthusiast vendor who has covered just 1,300 miles during his ten years of ownership. While not in use the SL has shared a garage in Kensington, London, with a beautiful Mercedes-Benz from the 1960's. Accompanying the car are Mr Earl's usage log book, copies of previous registration documents, about fifteen previous MOT certificates, old tax discs, a hand book and duplicate service book, a Sunday Times newspaper featuring the SL's 1994 advertisement, a 1994 maintenance invoice, a sales invoice from Mr Thomas to Mr Earl, and a spare set of keys. Low mileage SL's are a rare find and this special car would be a wonderful addition to any enthusiasts garage.
Share this page: